I woke up on a rainy Sunday with a pounding head. It had been a long night with what I can only express as too many rounds with José Cuervo, and dance moves that could have gotten me into some serious trouble! Sitting at my computer with piping hot coffee that had been only slightly discolored by a splash of almond milk, I looked at my to-do list and saw the exact opposite of what I wanted to see during the height of a stomach-turning hangover. In bold letters read: Sample Bradford Vodka.

Ten feet away from me sat a seemingly harmless bottle of booze waiting to be tried. Had it been any other day I’d pop that top, make myself a stiff drink, and settle in for a good buzz. Not today though. The thought of consuming any sort of alcohol sent my belly on a roller coaster of nausea. But after multiple attempts to consume a glass of orange juice and a slice of crisped toast, I decided I’d give it a go. With slight trepidation I removed the secure plastic wrap, released the cork, and poured a small sip. To my delight, a smooth, delicious, and refreshing vodka hit. In that instant I knew that Bradford Vodka would have a permanent spot in my liquor cabinet.

The story of Bradford Vodka began in 2009 when the now co-owners of Bradford Distillery, Bobby Rohla and Brad Selland, started thinking about producing locally-made alcohol. Over the next five years, the plans took form and in 2014 the vodka was born. But okay, just vodka? What’s so special about that? Well in a time when Pinterest-obsessed individuals are bending over backwards to create homemade goods, the creators of Bradford followed suit on a larger scale. From conception, their focus has been on creating a unique product, combining homegrown ingredients with handcrafted packaging.

Unlike many vodkas that are typically made from grains, the Bradford brand is potato-based. The potatoes, which are sourced from Swaz Farm in Hatfield, give the vodka its unique silky-smooth texture and clean flavor. The distillery makes approximately 750 bottles per production run and each bottle uses about 15 pound of potatoes, which go through a 4-step distillation process. The result is a high-quality drink. After distilling, the vodka is then bottled and hand-labeled using custom containers and labels.

As important as it is for the Bradford team to produce a handmade product, it is equally important that it’s done in the most sustainable way possible. After the vodka is bottled and shipped, the waste (called stillage) is then sent to Casella Organics in Rutland, and used to generate electricity. The residue waste is then sold as fertilizer to local farms. From root to stem and start to finish, the Bradford team ensures they’re operating in the most conscientious way possible.

Bradford vodka is now sold in over 80 establishments and 10 retail outlets along the South Shore. Ron Vale carries the product at the Corner Stop restaurant in Cohasset noting that “Bradford vodka is such a high quality product, you cannot have a serious beverage program without carrying it.”

The vodka is delicious when used in cocktails, or on its own. If you’re a true vodka aficionado, Rohla suggests enjoying it in a Bradford Martini, but if you’re really feeling the effects of last night’s libations and groovy dance moves, give my Roasted Bloody Mary a try. The tomato juice will sooth your soul and a little Bradford Vodka goes a long way in curing the hangover! 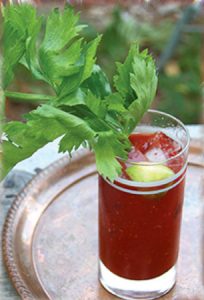 When Matt LaBombard isn’t planning author events and cooking demonstrations at Trident Booksellers & Cafe, he’s cooking up a feast for his family, friends, and readers of his blog, Cookery & Taste.