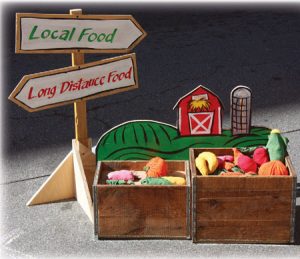 In the last ten years, farmers’ markets have become beloved fixtures in many communities, providing access to locally-grown and -sourced foods, a vibrant sense of community, and inspiration to improve the way we eat. In recent years, they have become something else—a springboard for business growth, as market vendors venture beyond the farmers’ market and begin selling their products in more traditional retail outlets. While not all vendors decide to take this route, it has proved very successful for three market favorites—Baking with Joy, Nella Pasta, and Ruuska Pickles.

Although the three companies followed different paths as they entered the retail market, the move has proved successful for each of them. Baking with Joy bakes more than fifty items from scratch, including cakes, quick breads, cookies, and bars. The products were an instant hit at farmers’ markets and, within a year of its 2006 founding, Baking with Joy was selling its products at the Fruit Center Marketplace, a grocery store with locations in Hingham and Milton. This year, Hornstra Farms also began delivering select Baking with Joy products. Sales growth has been so strong that the company recently moved its baking operation from their certified home kitchen into an 1800 sq. ft. facility located in Rockland. This new space will also be home to their own retail venture, a bakery café. 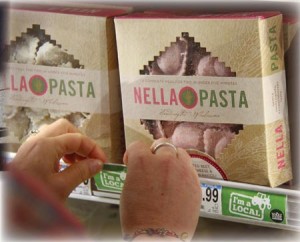 Nella Pasta on the freezer shelves at Whole Foods in Hingham.

Nella Pasta, based in Quincy, makes twelve delicious and inventive varieties of handcrafted ravioli and linguine, using local ingredients whenever possible. Intriguing pairings such as kale/currant and broccoli/feta/toasted cashew elevate Nella’s ravioli far beyond its bland mainstream counterparts. While Nella Pasta continues to sell both its ravioli and linguine at many area farmers’ markets, they have also achieved widespread retail distribution of their ravioli throughout New England at both local, independent grocers and Whole Foods stores.

Brian Ruuska started his eponymous pickle company in 2011, selling pickles such as Fire Dill and Sweet n’ Spicy at farmers’ markets and a few local, independent grocery stores. After partnering with a larger, family-owned food company, he was able to grow his distribution substantially and Ruuska Pickles are now found at many local, independent grocery chains such as Trucchi’s Supermarkets, and Whole Foods, as well as in stores as far away as Illinois and Texas. As the company grew, Brian decided to stop selling at farmers’ markets and concentrate exclusively on retail distribution.

What led these three very different farmers’ market vendors to make the leap to retail? In each case, it was the loyal customers at the farmers’ markets who encouraged the move. When customers fall in love with a local product, they fall hard! They want to be able to purchase the product during the winter, as well as mid-week, when many of the markets are not operating. As Leigh Foster and Rachel Marshall of Nella Pasta noted, “it was partly the customers asking what stores we were available in that made us realize that we needed to have an answer to their question!” Linda Davis from Baking with Joy echoed this sentiment: “After many customers told us we should sell our products at the Fruit Center, it only made sense to approach them.” 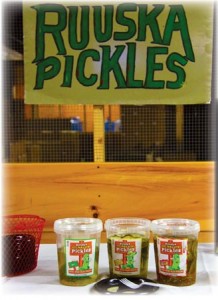 “there is a shock sometimes when it goes from farmers’ market production to a weekly retail store production.” -Mark Mignosa

For entrepreneurs accustomed to selling at farmers’ markets, moving to retail outlets inevitably brings change. Margins are smaller but, hopefully, increased sales offset the difference. And, unlike the farmers’ markets where they are paid immediately, retailers usually require payment terms, often paying the vendors a couple of weeks after the product was delivered. For the newly-minted retail vendor, this new cash flow pattern can require some adjustment.

Perhaps the biggest challenge is the loss of face-to-face contact, which is a fundamental part of the farmers’ market experience. As Brian Ruuska commented “[customer] feedback motivated changes in our flavors and recipes, and they really played an integral part in the evolution of my brand.” Now that he now longer attends farmers’ markets, he relies on tastings and Facebook to get customer feedback. Those vendors who maintain a market presence continue to get weekly feedback; as Leigh and Rachel noted, “Getting face-to-face time ensures that we are hearing how people feel about our product, what we’re doing right, wrong, and what they’d like to see in the future.” The sales process itself also changes in retail stores. Instead of providing samples that let the customer taste how wonderful the product is, the vendors have to focus on, as Leigh and Rachel put it, “Creating and designing our packaging so that [it] can sell itself on the shelf.”

“Customer feedback motivated changes in our flavors and recipes, and really played an integral part in the evolution of my brand.” -Brian Ruuska

For products that distinguish themselves, in part, by their handcrafted nature, ramping up production to meet increased retail demand can be a challenge. Mark Mignosa, store manager of the Hingham Fruit Center, which carries many products with farmers’ market roots, notes, “there is a shock sometimes when it goes from farmers’ market production to a weekly retail store production.” Delivering products to a wider geographic area can also prove to be a challenge. Because it is a frozen product, Nella Pasta had to find a frozen foods distributor, which was challenging for a small company. But, establishing a relationship with the right distributor can also translate into much wider retail distribution than a vendor could hope to achieve selling solely at farmers’ markets.

For their part, grocers are eager to meet demand for local products, and it is often the customers themselves who request that a farmers’ market favorite be carried. Mark Mignosa notes that the Fruit Center Marketplace welcomes local products: “As soon as they [vendors] come to the door, we are in the ‘we-want-to-bring-it-in stage.’” It is a win-win situation—customers are thrilled to be able to find their market favorites at the grocery store, and according to Mignosa, “some of these items are just cookin’ off the shelves.” Grocers will often go the extra mile to help market vendors make the transition to retail stores. In 2011, Brian Ruuska called Trucchi’s Supermarkets and mistakenly got the CFO, Ann Trucchi Condon, on the phone. She did not make buying decisions but, as she recalls, “I could honestly hear the determination in his voice.” Impressed, she put him in touch with the deli buyer, who loved the taste of his pickles and, after explaining a few steps he needed to take first, agreed to carry Ruuska Pickles in one store. They proved such a hit that the pickles are now carried in all six Trucchi’s locations. As Ann reflected, “Trucchi’s Supermarkets began with entrepreneurial spirit and we recognize the importance of nurturing it within our community.”

“Do it!” urges Linda Davis of Baking with Joy.

What advice to these market vendors have for others contemplating this move? “Do it!” urges Linda Davis of Baking with Joy, because it “gets your product out to a wider range of people.” These products have a devoted following and, for those vendors who want to grow beyond what is possible at farmers’ markets, moving to retail is a logical next step. As Brian Ruuska observed, “Retailers LOVE local companies because customers are asking for them!” So, folks, keep asking!

Julia Powers is a farmers’ market regular. But, to help get her through the winter or for weeks when she can’t get to the market, she is thrilled that area grocery stores are expanding their offerings of locally-grown and -sourced food.