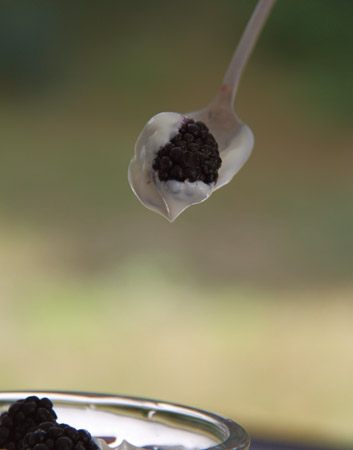 I prepare a simple breakfast on a summer morning, a bowl of blackberries over a generous scoop of yogurt. Fresh-picked and rinsed, the berries glisten in the bowl. I ignore small imperfections, the discoloration that might send store-bought fare into the trash. What garden berries lack in uniformity and cosmetic appeal, they make up for in taste.

In late summer I monitor berry growth carefully, collecting those nearing ripeness–deep reds trending to purple, sour trending to sweet–before birds pluck them. Dawn finds me with a plastic container in one hand, lifting branches and pulling aside leaves with the other, searching for the morsel that ripened overnight. Catbirds leave sour unripe berries and can strip a vine of ripe berries in an hour.

My backyard garden will never be profiled in the Living section of the Sunday newspaper. Lacking green thumbs but with all the best intentions I have sowed, seeded, watered, and weeded a patch of our yard for 20 years. The harvest is unpredictable, our meals supplemented by farmers’ markets and the grocery store’s produce aisle, but I persist.

The garden’s wooden fence is not pretty, low two-by-fours with chicken wire, but is sufficient to keep the rabbits out. The archway at the entrance sags and leans. My vision of a trellised wall of berries at the garden’s perimeter grows more like a ragged fence of thorns. Early summer brings peas, chives, and lettuce, followed in July by tomatoes, cucumbers, and peppers. Basil tastes best in June, but neglect and lack of pruning lead to flowering and a bitter leaf by August.

Garden preparation starts in the spring with high hopes and a trip to a local dairy farm. As I shovel manure from a large pile into the trailer the farmer ambles out of the barn. I pause, leaning on the shovel, happy for the interruption. He is in his eighties, and a lifetime on the farm has taken its toll. He is thin, bordering on skinny, and he looks tired, weathered. His jeans hang loosely, cuffs tucked into rubber muck boots. A faded white T-shirt smudged with dirt speaks of the morning’s work. We’ve known each other for years and make small talk for a minute or two.

Cows are curious and social. Drawn by my work, a few heifers wander to the fence to observe. Soon a dozen or so Jerseys, Holsteins, Milking Short Horns, and Guernseys watch me shovel with varying levels of interest. One seems particularly interested and ready to offer advice as she works her cud. Despite their horns, all of the cows are girls. It is a dairy farm. No boys allowed. The farmer once told me that he names all of the calves when they are born. The females get names like Buttercup, Belle, or Babe. Jokingly he told me males all get the same name: Veal. Most are on the farm only until the farmer can find someone who wants to raise them to market weight, or maybe keep them for beef. A few stay for breeding. 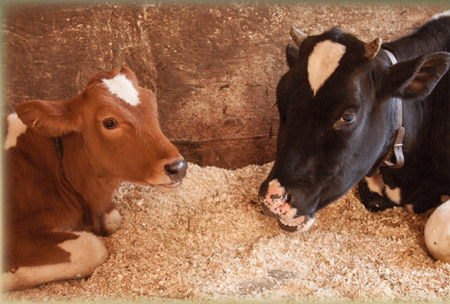 Dairy farms survive by selling milk. In some aspects the accounting is simple. More milk means more money. Standing by the manure pile I conjure a balance sheet. Revenue sources are simple: milk, the occasional veal calf, and maybe a little from selling older cows past their milking prime. Understanding the expense side of the ledger requires more work. The farmer has to feed all the cows that produce the milk. He also has to feed the calves, yearlings and unbred heifers that are not yet contributing to the bottom line. He loves his girls so he tends to keep some long after they are productive milkers when many other farmers would have sold them for hamburger. These older cows need to be fed as well. And then there are the costs for veterinary care, farm equipment, and farm help, to say nothing of what the rest of us call living expenses. The ledger seems unbalanced.

Manure loaded, I wander into the milking parlor, a long barn, dimly lit. Sunlight streams through a few windows and an open door. A barn cat greets me with a rub on my pant leg. The girls face each other in two rows. Held loosely in stanchions they slowly work their way through hay and grain spread before them on a concrete floor, eyeing me warily, an unfamiliar presence. The farmer moves among the cows, cajoling them by name and a gentle nudge from his shoulder, making sure the teat cup is secure and the hoses are clear, collecting samples for bacterial counts, applying salve to any injured udder. Through overhead tubing, an aged milking machine sucks raw milk through a vacuum tube to a refrigerated tank. A good cow can produce six or seven gallons of milk a day. He has 30 or so milkers. About 180 gallons a day if everything goes well. Which sometimes doesn’t. The chiller on the tank fails now and again so the milk spoils. When that happens he dumps the milk–and a day’s work–down the drain, the balance of the ledger tipping further in the wrong direction.

I’ve thought about the farmer and those who farm. Those who shepherd the conversion of the sun’s energy into something we eat or drink. The ecologist in me considers the pyramid of biomass. The idea that the earth’s organisms can be placed at different levels based on their relative station in the food chain. Plants show up at the lowest trophic levels and at the bottom of the pyramid. A plant requires a lot of energy to grow. It gets this energy from the sun. The energy inherent to the plant is but a fraction of the solar energy and other chemical inputs because of all the things the plant has to do to be a plant. Similarly, the energy inherent to a cow, through the consumption of the plant, is but a fraction of the energy from the plant because of all the things the cow has to do to be a cow. Cows eat a lot of grass and consume a lot of calories, but when we eat beef, or drink milk, we get only a small fraction of those calories back. Energy is lost as one ascends the pyramid. We humans are at the top of the pyramid, at the top of the food chain. It takes a lot of energy to create the food we eat. 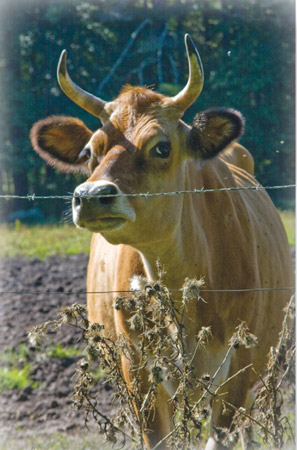 I wonder if there is a similar pyramid of food awareness. I wonder if our understanding of what it takes to produce the food we eat is only a fraction of what is actually required and if understanding is lost as we become more distant from the source. Whether we lose our appreciation for what it is to grow a vegetable or raise and slaughter livestock. I am not the first to ask, with chicken pressed into dinosaur-shaped nuggets and cheese sprayed from cans, is it any wonder that kids do not know that milk comes from a cow? If we all knew how hard it is to grow a tomato, to raise a chicken, would we appreciate our food more? Would we treat farmers any differently?

Inspired by the dairy farm, I’ve made butter, ice cream, cheese, yogurt, and a few other items typically found in the dairy aisle. Butter is exceptionally easy to make: simply shake or whip chilled heavy cream to separate the butterfat from the buttermilk. That’s it. Yogurt is only slightly more complicated. Heat whole milk to 180 degrees and let cool to between 115 and 110 degrees. Add a cup of plain yogurt or yogurt culture to the warm milk. Let stand at 110 degrees or so until the mixture has set, usually six to eight hours. (A crock-pot or warm oven helps here.) The added yogurt provides bacteria that grow in the warm environment, turning the entire pot of warm milk into yogurt. Just as bakers use a starter to make sourdough bread, the beauty of yogurt is that a cup of the yogurt you just made can be refrigerated and used as the starter for the next batch: a mother starter.

I sit on the steps enjoying this time before the house awakens, lingering over the few berries and spoonful of yogurt remaining in the bowl. The rising sun casts its first light onto the garden. I smile when a catbird alights on a post and hops onto the blackberry bush, then flies away. I have beaten him to the fruit.

Sam Butcher lives in Duxbury where he admires and learns from the farmers who feed us. 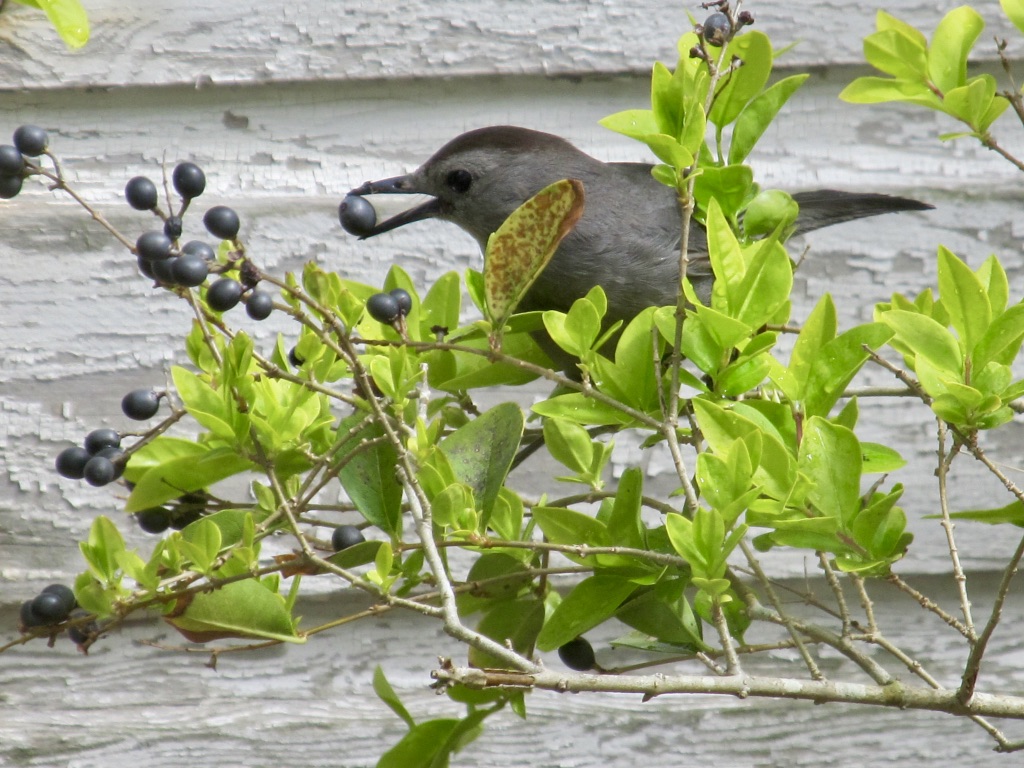