A New Voice For Ag. 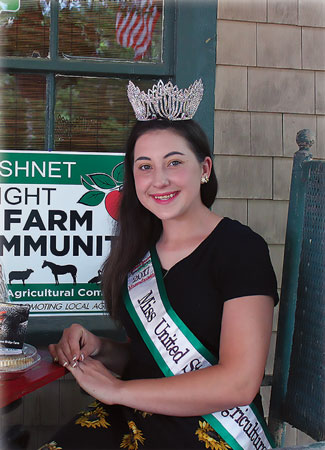 Harley-Anne Hamilton, Carver resident and Miss United States Agriculture 2017, has transitioned from speaking about agriculture in the classroom to speaking in front of representatives at the State House. This change of audience was completely unexpected for Harley-Anne; politics was not something she saw herself getting involved in before being crowned. Along with other speaking trips around the country, Harley-Anne had the opportunity to speak at an Urban Conference in Boston and to help educate members of Congress on ways to implement rooftop gardens and other urban agriculture projects.

Along with a change of audience, Harley-Anne has transitioned her talking points to fit audiences that are less knowledgeable in agriculture. Now, in addition to having the opportunity to talk to senators, governors, and state representatives, she is going back to school to improve this voice she has gained.

In her talks with educators, parents, children, and government, she has created an environment to creatively help communities understand agriculture and farming in ways that apply to them, from creating community and rooftop gardens to learning about hydroponics and container gardens. She has begun to find ways to open the doors to help get parents and children get involved in agriculture. Through Harley-Anne’s teachings, educators have also gained a new perspective to use within their classrooms—like art to create beautiful trellises and math to build raised beds—to support agriculture in their schools and community.

In her role as Miss United States Agriculture, Harley-Anne continues to grow and transform and is helping her community and country to do the same through discussion and creativity.

The 2019 Miss United States Agriculture National will be held in Orlando on June 22, 2019, it’s sure to be a barn raiser.

Jen Power is a Bridgewater resident who grew up surrounded by farmlands and is now starting to look beneath the soil and learn more about agriculture in her own backyard.