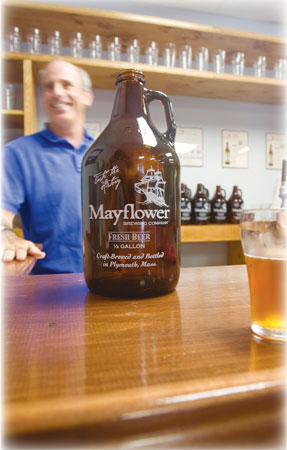 Drew Brosseau, Founder of Mayflower Brewing, as seen in the 2008 premier issue of eSS&SC.

Ten years ago, the brewing industry in Massachusetts was in a slow growth period. A new brewery hadn’t opened in almost five years, and the field consisted of a scant 35 individually owned breweries. Since then the industry exploded, with 160 breweries now open in Massachusetts–including 39 in 2017 alone–and 30 more expected to be opened by the end of 2018, according to the Mass Brewer’s Guild. At the forefront of the wave were Drew Brosseau and Mayflower Brewing… so much so that edible South Shore featured Mayflower in its inaugural issue in fall 2008.

“We started with four people: myself, two brewers, and a salesperson,” Drew recounts. “We packaged, sold, and distributed the beer ourselves for the [first] year of operations, with everyone doing a bit of everything as needed, including delivering beer in our cars on the weekends.”

Mayflower started small, kegs only, selling to South Shore bars and restaurants, and produced approximately 1,100 barrels of beer that first year. They grew, though, and by 2014 had expanded their delivery footprint to include all of New England. (2014 was a big year for expansions: edible South Shore extended its reach to include the South Coast and became edible South Shore & South Coast the very same year.)

Since Mayflower’s opening, over a dozen breweries have set up shop on the South Shore. “A big part of the growth in the last few years came from a change in the law that allowed for taprooms, which drove a big increase in the number of very small local breweries.” Drew explains, “Before that, the production breweries could not pour full pints on premise for consumers.” He also cites changing tastes (like the influence the IPA style has had on the industry), the availability of stable packaging (for example, mobile canning lines made a once very expensive packaging option affordable to small breweries allowing them to expand their reach), and the strong focus on new products as being big influencers in the growth.

Mayflower Brewing has continued to grow, along with the industry, still self-distributing most of the approximately 7,000 barrels they produce annually. They opened a taproom in the brewery, where they offer tours and tastings, and they offer space to host large-scale public and private events.

“We have also extended our reach into downtown Plymouth this summer with our bi-weekly Mayflower Beer Garden at the Mayflower Society House,” Drew says. 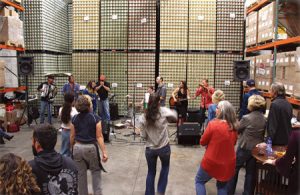 Mayflower has added more than 20 employees to the staff over the years. “And I’m happy to tell you that three of our original four members–Ryan Gwozdz, Jeff Nardone, and I– are still here doing what needs to get done to make it work,” Drew exclaims.

As the brewing industry grows, beer drinkers’ palates evolve. Breweries have to stay ahead of the evolution to keep pouring new styles into the glasses. In this vein, Drew points to the brewery’s Cooper’s Series as a marker for Mayflower’s future.

The brewery has produced a steady stream of the Cooper’s Series beers throughout Mayflower’s history. Starting with the outstanding Thanksgiving Ale 2008 (now a once-yearly addition to the portfolio), Mayflower has used this line “to give the brewer’s a chance to experiment with new beers,” says Drew, as well as provide variety within the Mayflower brand. The Cooper’s Series, which, this year, has included beers like X Imperial Stout, Jimador Agave Lager, and Peregrine Belgian Wit, also functions as market testing for the brewery, helping to provide direction for future projects.

Mayflower has been a leader in the brewing industry, but like many industries, there are interwoven relationships that help drive the overall community. When asked how he saw Mayflower’s influence on South Shore beer, Drew modestly looks toward the culinary scene. “We’ve simply been a part of an overall shift towards higher quality, locally grown, and more diverse food and beverages,” he says.

Allison DiMaggio, Mayflower Brewing’s head of social media marketing agrees, “There is always room for growth right within our own community, and it’s such a pleasure to see all these relationships strengthen and to watch everyone continue to do what they love!”

Matt Foster is a South Shore-based beer nerd. When he’s not writing about beer, or drinking beer, or brewing beer, or working (sigh… not with beer), he’s spending time with his wife, Lauren, and their two children.