Succotash: corn, beans, and a bit of history 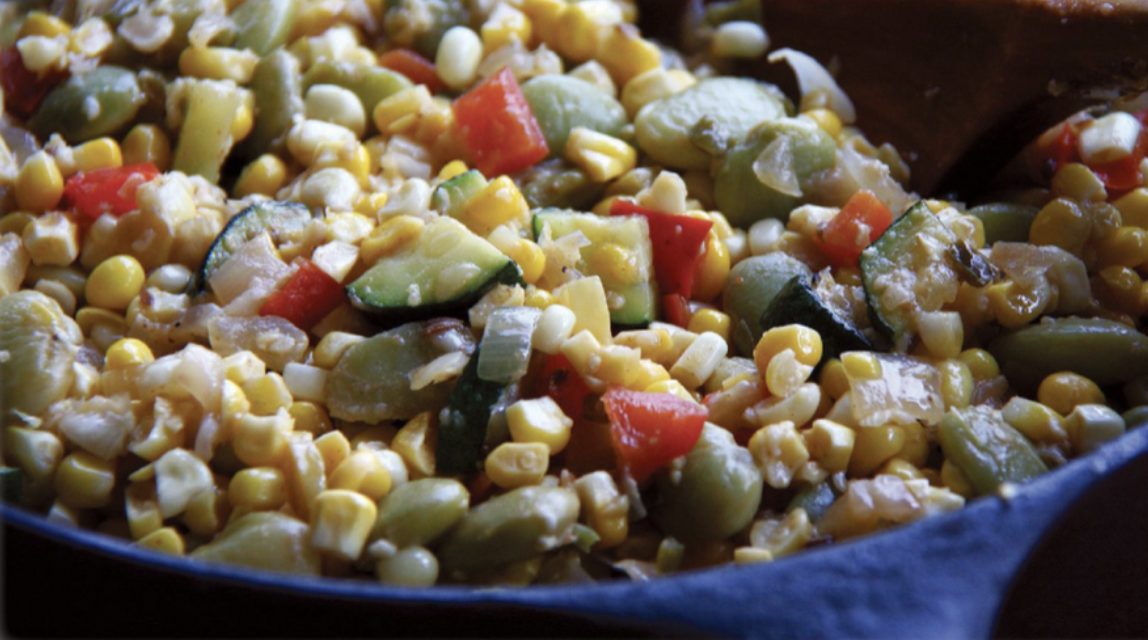 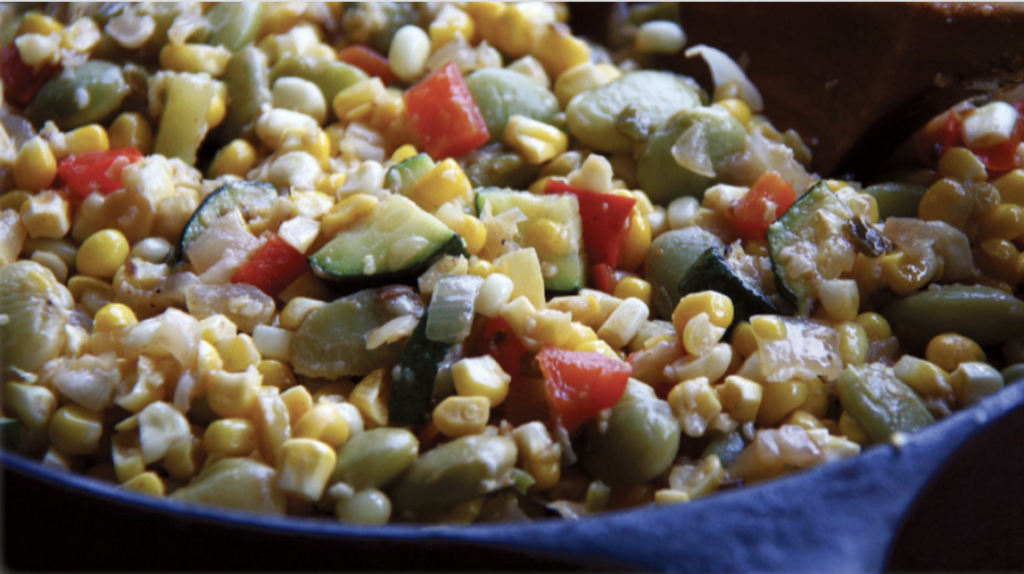 Succotashes—the whole family of luscious dishes based on corn and beans—have probably been on the menu around here since the 13th century, which is when archaeologists tell us that beans joined corn among the locally grown crops.  Historic sources and oral tradition indicate that Wampanoag cooks, and later the English cooks who learned from them, made many types of succotash depending on the season, the harvest, and the hunt, as well as on the cultural origin of the cook. Native succotashes were made savory with game and gathered foods, from bear and shellfish to wild roots and walnuts.  Foods introduced by colonists worked their way into the story of succotash, as substitutions for the wild foods that English land use and policies drove off, or otherwise made rare. Pork, potatoes, and turnips were tacked onto the ingredient list, even as venison and groundnuts slipped off.

Even the elemental corn and beans that were the dish’s two essential ingredients were subject to many variables. Most of the year, succotash was based on dried beans and preserved corn — corn that had been cooked, sliced from the ear and sun-dried, or air-dried hard and then processed with a wood ash solution. This latter technique loosened the hulls and exploded the kernels into addictively tasty (and nutritious) whole hominy. Each of these hearty dishes can be wonderful in its own way, but our enjoyment of a succotash made with fresh vegetables, at the height of tender sweetness, is keener for its short window of availability.  It is the apotheosis of harvest time.

In early fall, we New Englanders are faced with an embarrassment of the best sweet corn of the year, and plenty of garden ingredients to complement that bounty. The perfect opportunity to rustle up a seasonal food that actually feels righteous to overeat, like May asparagus or June strawberries. At our house, we get a pile of ingredients, make a humungous potful, and consume it as our main food as long as it lasts, even at risk of “bursting asunder in the middle”. If we start thinking clearly, we freeze a few tubs of it for later, but mostly, it must be admitted, we gorge.

This completely modern personal recipe is the sort that, while always delectable, is never the same twice. Mess with the proportions, include as many or as few of the optional ingredients as appeal, and introduce your new ideas to craft your own succotash tradition.

3 – 4 flavorful red or green garden peppers, some hot if you like, chopped

a fat pinch of kosher or sea salt

Melt the fat in a good-sized heavy-bottomed pot or huge frying pan. Add the onion and sauté over medium heat until translucent. Toss in the optional garlic, the peppers, and the optional cumin. Continue cooking for a minute or two. Add the cayenne and beans, stir for a minute and then barely cover the beans with water. Add the salt, turn the heat to low, and cover the pan.

Cook until beans are tender to bite, but not mushy, which can be anywhere from 15 to 35 minutes, depending on the beans’ maturity and dryness. If you are using the optional squash and tomatoes, toss them in and turn the heat back to medium. Cook and stir for a few minutes. When the squash is beginning to be tender, and the tomatoes have collapsed, add the corn. Toss to coat, turn down the heat, and cover. Cook until the corn is as done as you like it. Turn off the heat and let it meld awhile if you have time. Adjust seasonings.

If you want to use cream and/or scallions, stir in and simmer for a second late in the cooking. If you’re into the basil option, add it seconds before the succotash hits the table.

Serve hot or warm to 3 or 4 people crazed with the joy of the harvest season.

The only sticking point in making succotash these days is that very few farmers bring old-fashioned shell beans to market any longer. If you didn’t plant cranberry or lima or scarlet runner beans yourself back in May, prepare to do a bit of scouting for anything fresh in the shell. Ask around at your farmers’ market and snap them up whenever you see them.

Back in Winter 2010, edible South Shore printed an 1883 recipe for “Plymouth Succotash”, the traditional dinner of the town’s annual Forefathers’ Day. Insofar as it is based on hulled corn and dried beans and meat, that super-hearty succotash contains at its core a nugget of Wampanoag winter cooking. But a couple of centuries of English/Yankee farming had transformed a dish that in Native hands had been flavored and garnished with wild meats, birds, and fish, into one grounded in the barnyard, full of corned beef, fowl and salt pork. Worlds apart, but great sustenance for a small army in cold weather in any case.

That recipe, which originated with Plymouth’s Eliza Eddy Churchill and was printed in Mrs. Lincoln’s Boston Cook-Book can be found at: