Turkey on the Thanksgiving Table 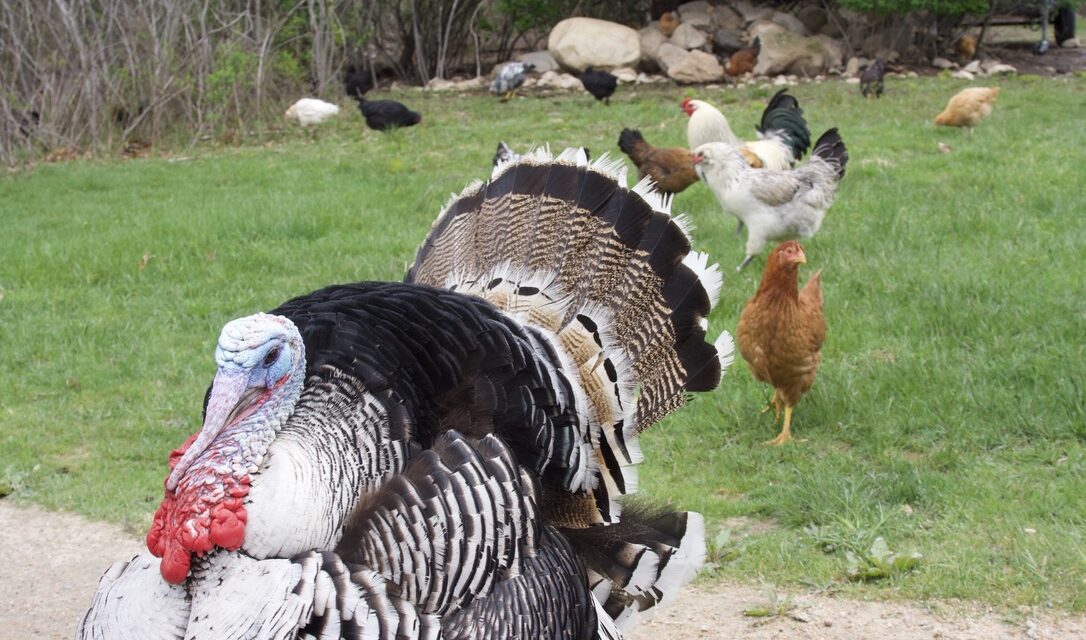 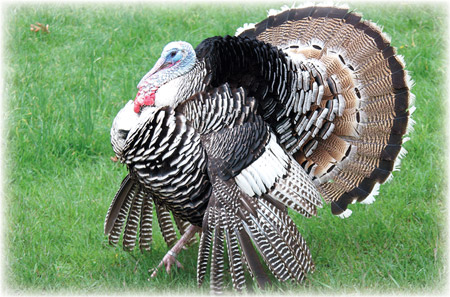 This article originally appeared in the premiere issue of edible South Shore & South Coast in October 2008.

When the Mayflower landed at Plymouth in December 1620, the abundant game onshore may have included as many as ten million wild turkeys. One early Massachusetts colonist, astonished by the large flocks of wild turkeys passing by, asked how many were to be found in the forest on a given day. “Neent matawna” was the reply: “countless.”

The only firsthand account of the harvest feast that modern Americans think of as The First Thanksgiving is a letter written by Edward Winslow in 1621 where he mentions “fowl.” To his friend in England he wrote from Plymouth, “our harvest being gotten in, our governor sent four men on fowling, that so we might after a special manner rejoice together after we had gathered the fruit of our labors. They four in one day killed as much fowl as, with a little help beside, served the company almost a week.” As well as turkeys, those “fowl” were probably wild ducks and geese, all of them plentiful and all of them considered fine celebratory food.

The wild turkey in the region then was Meleagris gallopavo silvestris, otherwise known as the eastern wild turkey. The bird thrived in the hardwood forests of New England among the oak, hickory, beech, walnut, and chestnut trees. During the region’s cold winters, roosting in treetops and walking atop the crusty snow, the non-migrating turkey managed to find enough nuts, seeds, and berries to survive until spring.

Meleagris gallopavo silvestris is striking for its typically dark brown plumage, its tail feathers tipped in chestnut or dark chocolate, with black or white bars. The male’s bald head has white, blue, and red skin and a wattle, the colors changing especially in mating season. The hen is duller in color, usually with more feathers on the head.

As early as 1629, ships from England supplied the Massachusetts colony with a very different sort of tame domestic turkeys that were easy for the settlers to keep near their houses and on their farms. Meanwhile, the native birds had become fewer and begun to be wary of the colonists. But with the introduction of guns, and English land-clearing and agricultural practices, wild turkeys were beginning to lose their habitat. As early as 1640, people noticed that the numbers of wild turkeys were seriously decreasing around Plymouth. By the 1730s wild turkeys in coastal New England neared extinction.

Crossing the eastern wild turkey with domesticated turkeys introduced from England created a new breed later named the Narragansett, for the region where it was developed. Its beautiful and distinctive coloration is predominantly black, gray, tan, and white. The steely metallic cast of its body feathers is set off by white stripes on tail and wings, also by a red wattle and white head.

This big, hardy breed was appreciated for certain advantages: it produced a lot of eggs and flavorful meat. Also, its large flocks didn’t stray; they ate the crickets, grasshoppers, and other insects that might harm crops; and they needed little feed. The hens were good layers who took care of their poults (chicks), and farmers valued Narragansetts for their calm disposition and early maturation. As the breed was improved and standardized, a full-grown tom might weigh 22 to 29 pounds, a hen 12 to 16.

In eighteenth-century New England towns, harvest celebrations that had become known as Days of Thanksgiving were occasionally declared. These family-centered holidays held on weekdays became the most important and certainly the most food-oriented special events on the calendar. The table at such an occasion be might be graced with a roast or boiled turkey, along with all sorts of other meats—while a turkey was perfectly appropriate for a celebratory meal, there was no particular identification of it with the day.

Over time, this harvest dinner gradually became more elaborate and developed into a ritual celebration. Especially in the Northeast, a certain assemblage of dishes, often including turkey, was beginning to be formalized into Thanksgiving Dinner—capitalized. Idealized descriptions in the mid-nineteenth century New England novels of writers like Harriet Beecher Stowe and Sarah Josepha Hale set the image of what a Thanksgiving dinner should be, drawing on their childhood memories; the turkey often played a part.

In 1846 the influential Hale began her campaign to have Thanksgiving declared a national holiday for the whole country. She saw it as a way to draw the nation together despite its divisions over the question of slavery. President Lincoln declared Thanksgiving a federal holiday in 1863 during the Civil War, setting it on the last Thursday in November.

Several of the varieties that we now call heritage turkeys were developed by poultry-breeders in the second half of the nineteenth century. The large and popular American Bronze, crossed with the Holland White, produced a new strain that transformed the market, especially as turkeys began to be sold by the pound rather than by the bird. This turkey, named the Broad-Breasted Bronze in 1938, worked well with the new technology of freezing birds whole or in parts, and by 1953 it began to appear in TV dinners. Starting in the 1960s, its exaggerated figure—short legs and large breast to supply the ample white meat preferred by Americans— necessitated reproduction by artificial insemination. The still newer Broad-Breasted White, bred to tolerate being raised in close confinement, superseded the Bronze to become the industry choice. Its blander flavor required “all the trimmings” on the Thanksgiving table. 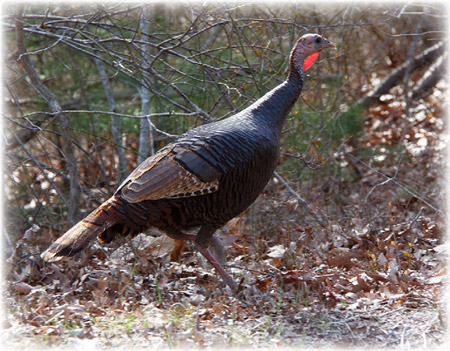 As for the Narragansett turkey, although it was still described as popular in 1938, a 1999 census counted a breeding population of six in the entire country. By 2006, efforts by the American Livestock Breeds Conservancy and others increased that number to 868, making the breed no longer “rare” but “threatened,” a remarkable achievement.

During the decades in which the iconic American bird became ever more industrialized, the wild turkey neared extinction. In the 1930s, the budding conservation movement and the abandonment of small farms during the Depression allowed the return of the shrubs and trees that form its habitat. In 1951, after several failures, state wildlife agencies found that flocks trapped in nets and moved elsewhere—a method adapted from the Native Americans—succeeded. In this way, and with the help of hunters, the wild turkey has been fully restored, a near-tragedy turned into triumph.

Today, you doubtless have seen ample evidence of the success of that wild turkey reintroduction, as Meleagris gallopavo silvestris, once again seemingly countless, wander by our doors.

The author, Elizabeth Gawthrop Riely, who was a vivacious part of Boston’s food writing and culinary history scene, passed away in 2017. The original article of 2008 has recently been edited and updated by Paula Marcoux. 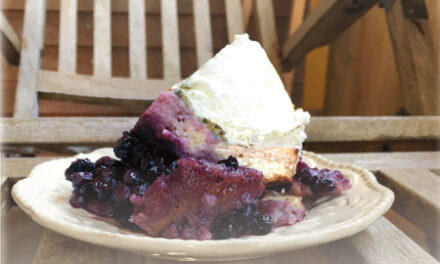 Seeds of Success : The Macomber Turnip 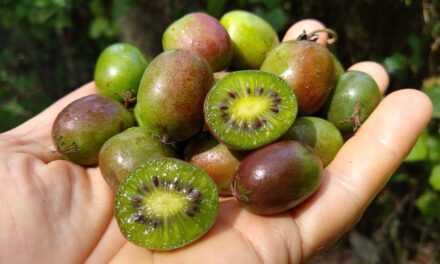 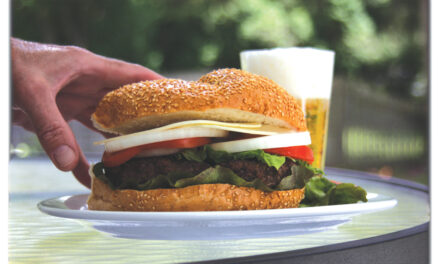 A Guy, A Beer, and A Burger