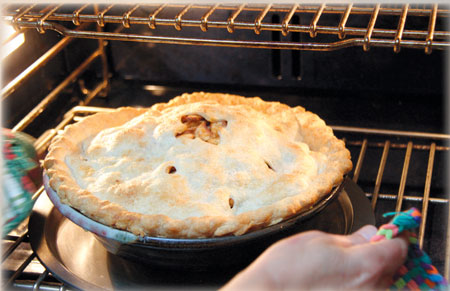 Use your largest sturdy pie dish or a ceramic or enameled cast iron baking dish; oval will do. The spicing and sweetening in these proportions is restrained so that the predominant flavor is apple. Adjust to your taste, by all means. Sometimes, if the apples are lackluster, I’ll add a few tablespoons minced candied ginger, like my mother used to do.

Put the apple slices in a large mixing bowl. Squeeze lemon juice all over. In a small bowl, combine the flour, sugar, and spices. Toss with the apples. Set aside.

On a well-floured surface, with a well-floured rolling pin, roll one of your pastry disks thinly and evenly, eyeballing your pie dish to approximate the shape and size. Line the dish with the pastry, letting the excess hang over the perimeter of the dish. Dump in the apples, but try to arrange them fairly compactly, rising in the center as a truncated cone. (If they don’t heap as high as you’d like, quickly prep a few more and add to the top.)

Roll out the top crust. Moisten the top of the pastry on the dish’s edge around the apples with a little cold water. Lay the top crust on, and press very gently to seal where moistened. Use scissors to trim excess pastry away, leaving at least 1 inch of overage. Crimp the edges decoratively together, brush the surface with a very little cold water, and sprinkle with a smattering of sugar if desired. Slash a few attractive vents on the upper crust.

Place in the center of the oven. After 10 minutes, turn the heat down to 350, and bake another 45 minutes or more. The pie isn’t done until you see definitive bubbling action in the center slit. If pastry is golden-brown before the filling simmers, you may drop the temperature another 25 degrees and, if you feel that it’s apt to brown too much, drape it loosely with foil. Whatever you do, do not underbake the pie.

Allow to cool most of the way before serving.