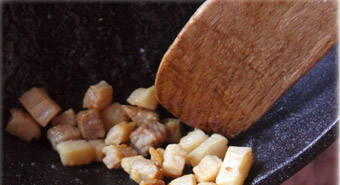 Making authentic lardo is generally beyond the reach of even the most dedicated of local home cooks, as most of us don’t have access to critical ingredients and equipment—any readers happen to have a spare Carrara marble salting vault with matching lid kicking around the pantry? That said, New Englanders have been salting down pork fatback and belly meat since the 1620s, so we’re really no slouches ourselves.

Once a standard ingredient in chowder and baked beans, salt pork became unfashionable in the second half of the twentieth century, as anti-fat hysteria swept our nation. But now that we can easily buy terrific pasture-raised, heritage-breed meat at farmers’ markets again, home salting should make a comeback too. It’s a simple process, and the result—a thousand times better than store-bought salt pork— is great to keep on hand not only for chowder and beans, but for braised dishes like garbure, and starchy staples like mofongo. It’s even mind-blowing in salad, as long as you term it in French (lardons; recipe right).

Cut the fat in slabs so they may be arranged in a lidded container. Rub with seasonings. Cover with brine. The fat should be fully submerged.

Refrigerate for a week, rearranging the fat every few days for even salt exposure. Once salted through, this salt pork keeps in the fridge for months as long as it remains submerged in the brine. To use, cut thick slices away from rind and return the rest to the brine.