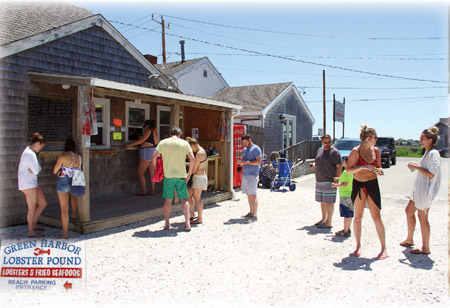 The Philpotts are the second family to own the clam shack, which has been there since the late 1940s. George Jackson originally started it; his daughter, Barbara, married a lobsterman named Fred Scott. In 2003, Paul’s mother, Dottie Duggan, bought it, and Paul and Dottie have run it ever since.

The menu is small, but it offers everything you’d expect to find. There are fried clams, clam strips, scallops, shrimp, and haddock, along with lobster rolls and clam chowder. There also is a selection of “LandFood,” including hot dogs, hamburgers, chicken, and grilled cheese. Sweet potato fries are on the menu as well.

All of the lobster is hand-shucked on site. Paul mixes his signature old-school-style batter, which he finds far superior to the pre-made seafood batter many restaurants use. Onion rings are hand-cut and hand-battered on site, and fried seafood is hand-battered to order.

Green Harbor Lobster Pound’s seafood is fresh and local. Paul gets his clams from Ipswich, which he explains are the sweetest clams. The haddock is also from Ipswich, the scallops from New Bedford, and the lobsters are right off the boats that fish out of Green Harbor.

The Pound is located between the Cut River and Green Harbor, and the dozen outdoor picnic tables offer views of both the river and the harbor. Diners here can eat a lobster roll as they watch the boats that supply the crustaceans come in for the day.

Live lobster, crab, and steamers are available for retail sale, and they’ll steam lobsters if customers call ahead.

They open for the season on Mother’s Day weekend and then weekends only until around Memorial Day. From Memorial Day to Labor Day, it’s open daily from 11 am to 8 pm.

Things to know: The Pound is cash only. There’s an ATM on site. Parking can be tight. Because the lobster is hand-shucked, they sometimes run out of lobster rolls during busy times.