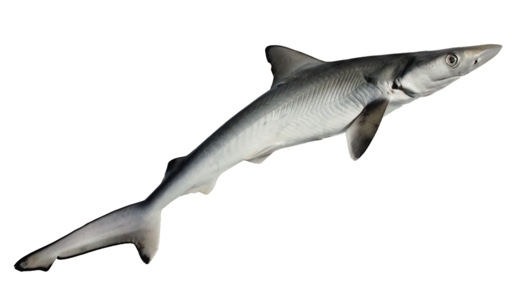 What’s in a name? For the region’s commercial fishermen, the answer could be a whole lot.

As our beloved and iconic cod stocks dwindled after a one-two punch of overfishing and environmental changes, it’s been the lowly spiny dogfish that has helped keep boats afloat and fishermen working.

The slender-bodied, grayish-brown shark is plentiful (for now) and produces a mild, white, flaky bite that New Englanders can appreciate. But let’s just say the spiny dogfish isn’t going to win any beauty contests. Although the British have been devouring it in their fish and chips for years, here in America, the name alone has been considered a barrier to getting eaters to give it a try. Wait, dog what? Uh, no thank you.

But how would you feel about eating Cape shark instead? Perhaps some delicious Cape shark fish sticks? Or kid-friendly Cape shark fish nuggets? In 2015, the Food and Drug Administration gave fishermen the OK to rebrand spiny dogfish with the more appealing Cape shark moniker. The hope is that the sexy new market name will boost fishermen’s chances of creating a domestic market for the fish, and help increase the availability of seafood sourced locally. According to a new study by eatingwiththeecosystem.org, only 12% of the seafood offered in area supermarkets is harvested in New England. (Rhode Island fares a little better at 24%; Maine comes in at 33%.)

It’s just one example of the many challenges New England’s commercial fishermen are grappling with as climate change threatens to capsize their industry. The waters where they make their living are among the fastest-changing regions in the world. The area, known as the Northeast Continental shelf, has been warming two to three times faster than the global average. That’s forced longtime fishermen like Chatham-based Doug Feeney to adapt, much in the same way the fish he chases are themselves adapting.

“There are no more groundfish fishermen here anymore,” says Doug. Groundfish include species like cod or summer flounder that swim closer to the ocean’s floor. “Things have changed. Groundfish used to be plentiful. Boats were bigger. We used to go farther and had a lot more gear on the boat. I don’t want to use the word ‘collapse,’ but we used to land 10,000 cod every day. Today you’re lucky if you land 800 pounds.”

Today Doug is working off his 36-foot fishing vessel, the Noah, named after his young son, but to earn a living, he’s had to focus on far more than just cod. Instead, Doug now goes out for spiny dogfish (oops, “Cape shark”), skate, monkfish, and giant bluefin tuna when he can.

“We didn’t have to do that before. When we had cod, we’d fish for six to seven months and then you were done. Now, we’re working on species that don’t pay as well. I went from $2 a pound codfish to 18 cents a pound for dogfish. That’s why you have to participate in a number of fisheries to make it work nowadays,” Doug says.

Scientists say the abundance of spiny dogfish and the absence of cod isn’t the only shift they’re seeing in the region. Lobsters, once plentiful in Long Island Sound and southern New England—Connecticut and Rhode Island—have all but vanished, with recorded landings dropping by as much as 97% in some areas.

Maine’s pink shrimp fishery has been shut down since 2013 because of record low numbers that were also crippled by low reproduction levels, and it will remain closed through 2021. Should managers eventually reopen the fishery, it will come with a host of new restrictions, including new gear requirements, stricter penalties for exceeding quotas, and more.

Blue crabs, once caught in waters off Maryland, Virginia, and North Carolina, have now made their way to Maine, reports David Samuel Johnson. Meanwhile, smaller species like herring and hake have moved on to cooler waters and are being replaced by loads of butterfish, thanks to changing bottom water temperatures. Butterfish may sound like something rich and tasty, but the tiny fish rarely is eaten by Americans.

If you’re starting to fret, hang on. There’s some good news to be had, too.

“It’s not that things will be uniformly negative,” says Rebecca Selden, senior postdoctoral fellow at Rutgers University. “There’s evidence New England will gain more black sea bass, fluke, maybe scup. Squid is doing quite well. Hopefully markets can adapt to that and consumers will want to see those species on their plates. You just might not see what you used to see.”

Rebecca says there’s been a huge boom in the number of redfish, haddock, and pollock in the region’s waters. And while it’s (mostly) welcome news that black sea bass may be moving into New England, black sea bass has historically been most abundant off the coast of North Carolina. That shift is prompting something fishermen are likely to see more of in the future: territorial friction over just who will have permission to catch it. Giving fishing rights to one group of fishermen eventually means taking them away from another.

The institutions that manage our fisheries need “to catch up with the rate that things are changing,” says Lisa Kerr, a research scientist with the Gulf of Maine Research Institute. “We have a dramatic shift that fishermen see when they put their nets in the water, and it’s happening faster than I would have anticipated. The fact that we’re seeing regulations be made on a fish we’ve never seen [until now] in these waters is really quite dramatic.”

In 2016, scientists with the National Oceanic and Atmospheric Administration (NOAA) released their first multi-species assessment of just how vulnerable New England’s fisheries are to climate change. Researchers looked at 82 commercially-managed species, and as you hear often when it comes to climate change and the ocean, there will be winners and losers. Species that move between fresh and saltwater, like sturgeon and Atlantic salmon (yes, there are still a few out there), and those that live on the sea floor, like lobsters, scallops, and clams, will be the most vulnerable to ocean changes. Fish that live near the surface, like herring and mackerel, are expected to fare better. But for many species, survival isn’t simply about shifting locations.

“There are two types of changes that we call ‘most noticeable,’” says Jonathan Hare, science and research director for the Northeast Fisheries Science Center and lead author of the study. “Species distributions are changing, and in some cases, the productivity of species is changing— meaning the ability to replace themselves is changing.”

And for seafood lovers, there may be other, more ominous, health ramifications to warming oceans.

New England’s oyster growers have been enjoying steady demand for their tasty bivalves, but since a 2013 Massachusetts outbreak, they’ve also had to adapt to an increasing threat of Vibrio bacteria, which can be fatal to humans who eat contaminated shellfish. Scientists now say that as water temperatures rise, so too does the risk that your shellfish dinner could be infected by strains like Vibrio parahaemolyticus and Vibrio vulnificus. That looming threat has prompted states like Massachusetts and Connecticut to develop robust Vibrio Control Plans requiring shellfish growers to adhere to strict harvesting guidelines, including icing oysters within one hour after harvest. The threat posed by Vibrio has also prompted some growers to adopt new practices, like moving their oysters to cooler, deeper water during the warmer summer months.

“Shellfishermen are going to be versatile,” says Nancy Civetta, shellfish constable for the Town of Wellfleet. “Regulations are constantly changing because you work with Mother Nature. They’re used to things changing. It’s public safety first. They all want to bring healthy, safe oysters to market.”

And they’re not the only ones trying to mitigate risk. In October 2017, NOAA announced a $312,000 grant to MIT Sea Grant to create a sensor that can detect the presence of Vibrio bacteria in water as it reaches levels that could be dangerous to humans.

Peter Baker, who directs ocean conservation efforts in the Northeast for The Pew Charitable Trusts, says there are still things we can do to minimize climate change impacts in our region. “If you set a marine reserve area aside where you’re not allowed to fish or mine or drill … where fish have a sanctuary, they’ll find those areas and can rebuild populations that will spill out. It works,” he says. “And we also need to work on protecting the forage base. Tuna, striped bass, and cod all have to have something to eat. Protecting the river herring, menhaden, krill, and copepods is important. If they’re abundant, it gives the predators a much better chance to survive.”

And, just maybe, taking that advice will give our commercial fishermen a better chance at survival, too.

Article reprinted with permission from edible Boston and edited slightly from the original.

Clare Leschin-Hoar covers seafood and food policy. Her work has appeared in Sunset, EatingWell, Cooking Light, The Guardian, Scientific American and on NPR.