Making the Grade for Bluefin Tuna

Bluefin tuna make their grand entrance to our coastal waters in June, although it is rare to see them close to shore. Sometimes they can be spotted racing through the Cape Cod Canal or having a feeding

frenzy off the beaches of Provincetown. If you are fortunate enough to spot one, you’d best look quickly: with their sleek, muscular bodies, they are capable of swimming up to 40 miles per hour. A blitzing school of bluefin can explode on the surface in one spot, submerge, and with a few flicks of their crescent-shaped tails, reappear hundreds of feet away in mere seconds.

Atlantic Bluefin tuna live up to their name, traveling the entire length and breadth of this vast ocean over their lifetime to forage for herring, mackerel, menhaden, eels, squid, and other invertebrates. They are relatively indiscriminate in their quest for food, but loyal to their place of birth, and each they year will return to either the Gulf of Mexico or the Mediterranean to spawn. Bluefin begin their lives no bigger than minnows, and in a decade they can reach over eight feet in length and upwards of 500 pounds. And somehow, despite traveling thousands of miles each year and honing these incredibly powerful bodies, their meat is not tough and stringy. On the contrary, bluefin tuna is prized for its rich, smooth, and creamy flesh, for which many people, particularly the Japanese, will pay dearly. 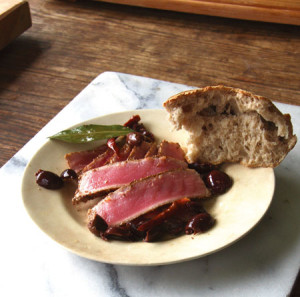 “Bluefin tuna is prized for its rich, smooth, and creamy flesh…”

This wasn’t always the case. Until the 1960s bluefin tuna was thrilling to catch as a sport fish but ignored as a foodstuff. Sasha Issenberg, author of The Sushi Economy: Globalization and the Making of a Modern Delicacy, describes how “those who brought in bluefins would have to pay twenty dollars to have the catch carted to the town dump, or would bring them into harbor to pose for pictures and then take the carcasses back out by boat for an ignominious burial at sea.”

While the Japanese had been enjoying tuna in the form of sushi for well over a hundred years—with bluefin by far their favorite—it wasn’t until the mid-70s that Americans overcame their leeriness of this deep red-fleshed fish and became converts to the sushi phenomenon. There would be no more cheap deals on the magnificent bluefin after this.

The annual arrival of the bluefin is eagerly anticipated by commercial and recreational fishermen. There is absolutely no other fish in our local waters that can offer the same exhilarating fight with rod and reel, and also deliver such a huge payday both as a culinary delight and as a moneymaker at the fish auction. With world supplies dwindling and demand ever-growing, each year the stakes get higher and higher. Tokyo’s Tsukiji fish market’s first fish auction of 2013 sold a 489-pound bluefin for an astounding $1.76 million (roughly $3,500 per pound), breaking the prior year’s record by nearly threefold.

Although our local fishermen know they will never get $3,500 per pound for their fish, they are aware that there is still big money to be made by landing a giant (over 300 pound) bluefin, as long as they take care of the fish and get it to the tuna grader as quickly as possible. The difference between landing a good fish and landing a great fish is made abundantly clear on the National Geographic Channel’s wildly popular “Wicked Tuna.”

On the show, the fight really begins when the fish is brought to the surface and hooked through the mouth with a special piece of equipment called a fly-gaff. A rope is then quickly tied to the tuna’s tail, and with a yank, the fly gaff ‘s handle is released, leaving the sharp hook of the gaff still in the fish’s mouth, secured with another rope. This arrangement allows the fish to continue to swim and cool down naturally, which is imperative to maintaining the quality of the meat. Without this step, which releases the lactic acid that has built up in the tuna’s body through the stress and exertion of the fight, the meat will have an appearance of being cooked or “burned,” substantially bringing down the price of the fish. (This stress response is not an uncommon phenomenon, as Pacific halibut, farmed salmon, pork, and chicken have also been found to decrease in quality if their stress levels have accelerated prior to processing.)

Once the fish cools down, a quick incision is made through the gills or near the pectoral fins to “bleed” the fish and kill it before bringing it on board—a live tuna cannot be brought onto the boat without risk of damage to the crew and the meat. The head and spinal column are then quickly removed and the fish is packed in ice to bring down its body temperature and preserve its freshness until the boat can get back to the harbor and meet up with the tuna grader.

The tuna grader wields a sharp knife and a sashibo, a long, stainless steel probe that he plunges into the back of the tuna to take a core sample of the flesh. The sample is then evaluated against a slice taken near the tail to compare color and fat content. There is no school to attend to become a tuna grader; you need to learn the craft in an apprenticeship program, which usually culminates with a trip to Japan to learn from the masters. In Massachusetts, you can count on one hand the total number of tuna graders, and they are available at a moment’s notice 24/7 from June through the fall as they follow the bluefin, and the boats, down the coast.

Tuna graders evaluate a fish as soon as it comes to the dock, taking into consideration when it was caught (June fish have just arrived in our waters and haven’t fattened up as much as later season fish, but sometimes late season fish are the weaker stragglers of the school), how it was caught (a fish caught on a rod and reel will probably have struggled less than one caught in a net or purse seine), and even where it was caught.

Graders all agree that the best bluefin is caught from mid- to late-summer through September, when the fish have had a chance to gorge on their favorite baits. The key to bluefin prices is fat: fat equals dollars. The graders will tell you that you get quality in the summer and volume in the late fall and winter. Around Thanksgiving of this past year, boats were catching their limit of five tuna a day off of New Jersey, although most were smaller than the giants, coming in at 200-250 pounds cleaned and dressed.

In the past, almost all of the bluefin were destined for Japan’s sushi market, but with the decline in the yen, many of these fish are staying in the United States, destined for Las Vegas, Los Angeles, and New York City. There, they will be prepared for discerning sushi and sashimi eaters not averse to paying top prices for these majestic fish.

Kathleen Fitzpatrick Wright is one of our Contributing Writers whom you may recognize from her previous articles on fish and shellfish. An avid fisherman, she has yet to catch a bluefin but hopes this will be the year!