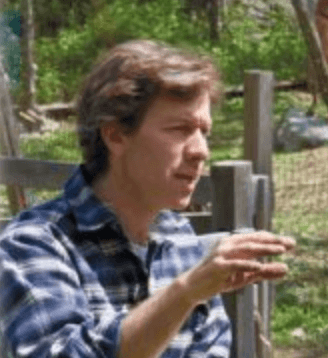 Jon Belber preaches the gospel of good food—organic, locally grown, and available to all regardless of income or zip code. And like any good preacher, he teaches as much by his actions as with his words. As Director of Farm Education at Cohasset’s Holly Hill Farm, Jon’s out-of-the-box approach has helped to make healthy food accessible to neighbors in need and teach kids of all ages the importance of growing good food: to benefit our health, the local economy, and the environment. On a quiet, chilly morning on the farm, Jon sat down with me to share his approach. 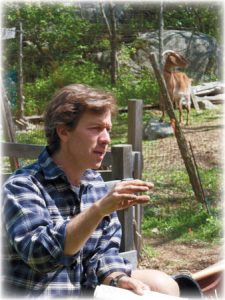 Q: Where did the concept to bring organic, locally-grown food to underserved communities originate?

Q: The Community Service Program for teens is one way you accomplish this mission. How does that work?

A: The farm has, for a long time, donated to the Cohasset Food Pantry. I wanted to step it up—have kids come complete community service on the farm, and take part in growing and donating produce, not only to Cohasset, but also to Wellspring in Hull, and to Father Bill’s in Quincy. An important aspect is to get the kids involved in the delivery. Last year, we had about 40 kids (aged 14 to 18 years old), which is pretty good considering all the other things that they are doing. About 10 of those kids came repeatedly; they found a little niche here.

Q: Are there other ways you get teens involved?

A: This fall, there were three Cohasset high school kids doing internships here during the school day. One thing we did was to build four raised beds at Wellspring. One bed, we planted with garlic. Wellspring is not versed in growing organic produce but this spring I see us putting in some easy-to-tend crops, like potatoes or carrots. So that is very exciting, to know they can get stuff right outside their door, and it speaks to the concept that there are so many lawns, so many spaces, and so many vacant lots that are ignored or underused. So, why not get a little bit of growing going?

Q: What other efforts have helped make organic food more widely available to the community?

A: About four years ago, one of the efforts was helping establish the Teak Sherman community garden in Scituate. Scituate residents maintain those plots and donate a portion of their produce yield to the Scituate Food Pantry. In addition to the 30 plotters, there are six plots that are dedicated to the food pantry. Suggestions from the food pantry pointed out “most of our clients use common vegetables such as carrots, potatoes, lettuce, tomatoes, and squash.” 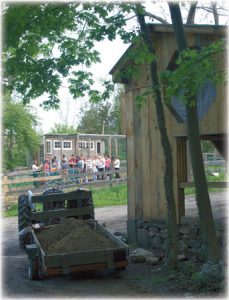 Q: What lessons have you learned along the way?

A: As we had been trying to find out what the clients at the Scituate Food Pantry desire, organic kale and chard are not at the top of their list. For a long time, they wanted potatoes to put into their canned soup to mop up the sodium. So, if that is a role that organic produce can play, then ok. It is not the top-heavy, do-good organic farmers ‘we are going to help you and here is your kale and chard—good luck!’ How is it that is really going to be helpful to your daily living as you come in and out of your dependency on the food pantry?

Q: Any other ideas percolating?

A: The South Shore is creeping towards Share-the-Road signs, but it is a car culture. I would like to find a bicycle or two that could get the produce to locations by bicycle rather than by car. We did do a couple of bike rides to the Cohasset Train station with bins of produce. It was a good effort. We have a relationship where we collect compost ingredients from The Corner Stop (Hull) and Coffee Corner (Hingham). But, I’d like to increase that. Maybe with that bicycle I am talking about, we can be collecting compost from a greater number of places.

Through his innovative programs, Jon puts into practice his belief that “food justice is social justice.” As his co-worker, Cindy Prentice, Executive Director of Holly Hill Farm observes, “His brain is always churning from one possibility to the next of how to connect people of all ages to the natural world and sustainable food and farming.”

Creative, committed, and caring, Jon Belber is working to ensure locally-grown, organic food is not a luxury but, instead, a cornerstone of good health available to all.

Julia Powers is a nutritionist and writer based in Hingham. A long-time patron of Holly Hill Farm, she loves visiting its’ beautiful grounds and historic barn and appreciates their commitment to locally grown, organic food.

Related article:
“What’s Cooking?” is a rap about all things local and edible with those who are striving to make a difference in our community.