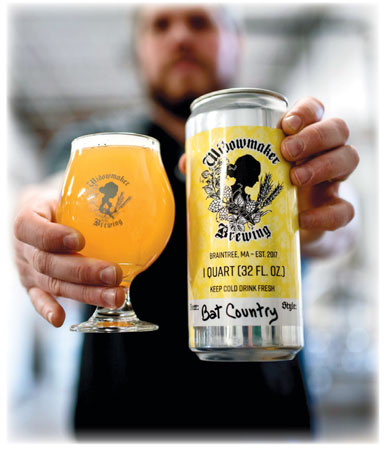 Opening a brewery is a full-time job, and then some. Ryan Lavery, a founder of Braintree’s Widowmaker Brewing, was focused on the amount of time he spent at the brewery, away from his family, when he jocularly chose the name for the brewery.

“I never really imagined it’d get this big,” Ryan said, on a recent Saturday night at one of the common tables that fill half of his taproom, giving the place a “communal European beer hall” vibe.

Ryan’s journey to establish Widowmaker started in the home-brewing realm alongside partner Colin Foley, which led to providing brews for block parties, through which the pair were introduced to their third partner, Bud Lazaro. After a brief search for properties, the group decided on an old bathroom vanity workshop in the hills of Braintree, overlooking Route 1/93 on one side, and in the shadow of Blue Hills Reservation on the other. In November of 2016, the trio began the ten-month process of transforming the factory into a taproom. Widowmaker opened its doors for business in September 2017.

Opening as a tap room was at the forefront of Ryan’s plans. “I always wanted to have a place for people to visit and get to know us and our story,” Ryan said. He pointed out that their beer is available at about 20 tap accounts across Southeastern Massachusetts with Weymouth’s Union Brew House being their first account. “I fell in love with craft beer there,” Ryan confessed. In addition, Widowmaker brews are available in “crowlers” (a 32-ounce aluminum can) in some retail accounts, including Bin Ends, the fine wine & liquor store just up the road from the brewery.

Widowmaker has also caught the eye of Night Shift Brewing and its distribution company, Night Shift Distribution, who began delivering the Braintree brews throughout Boston, the North Shore, and the Worcester area early this spring.

The brewery supports local food trucks on Fridays and Saturdays and offers varied events such as yoga and Zumba in the tap room (check their website for a schedule).

Widowmaker holds onto its homebrew roots with 75% of their 11 taps pouring scaled-up recipes, perfected alongside head brewer Ryan Ward, from Ryan’s early days of providing beer to friends and neighbors.

“There’s a lot of pressure to brew IPAs,” Ryan said, “and we have five on tap right now, but we also love providing options such as stouts, porters, and lagers.” He considers their Greenbush Pale Ale, Ecstasy of Gold IPA, 50 Year Storm DIPA, and Donut Shop Coffee Stout to be the flagship beers of the brewery and offers those, among others, in flights of four 5-ounce pours, half pours, and full pours at the bar. “Drinkability is key,” Ryan said of all the brewery’s beers, noting that the visitors to Widowmaker have been very supportive.

Greenbush Pale Ale features mosaic hops, which lend a distinct mango flavor to this smooth, 6.8% pale ale. Ecstasy of Gold weighs in at 7.2% and brings with it a gentle hop bitterness with a solid malt backbone and ease of drinking. 50 Year Storm features an all Australian hop palate, which lends to a straight-up juiciness. It’s big in flavor, hazy and hoppy, and 7.8% ABV. Donut Shop features Hingham’s Red Eye Roasters’ coffee, cold brewed on location at the brewery. The coffee is evident in the nose and flavor, with a medium body and a smoothness you don’t expect.

Also on tap was Millilux, an exceptionally hopped session IPA (4.2%) loaded with Cascade and Simcoe hops. It’s hoppy and crushable, with a zippy mouthfeel. One shouldn’t miss the brewery’s com-RAD Russian Imperial Stout. The base recipe is Donut Shop, with a ramped-up hop schedule, Belgian Candi sugar and lactose, this 10.1% behemoth exudes smoothness. It features a creamy, coffee-laden flavor, with no noticeable alcohol burn but a warming sensation all the same. Also of note: Sinister Riff s, a 7% black lager that balances the roast you expect from a porter or stout with the crispness lager yeast imparts. It’s a solid addition to one the great under-recognized beer styles.

Along with its Braintree brewery, you can find Widowmaker in various bars, restaurants, and package stores, and on the web on Facebook, Instagram, and Twitter as @widowmakerbrew.