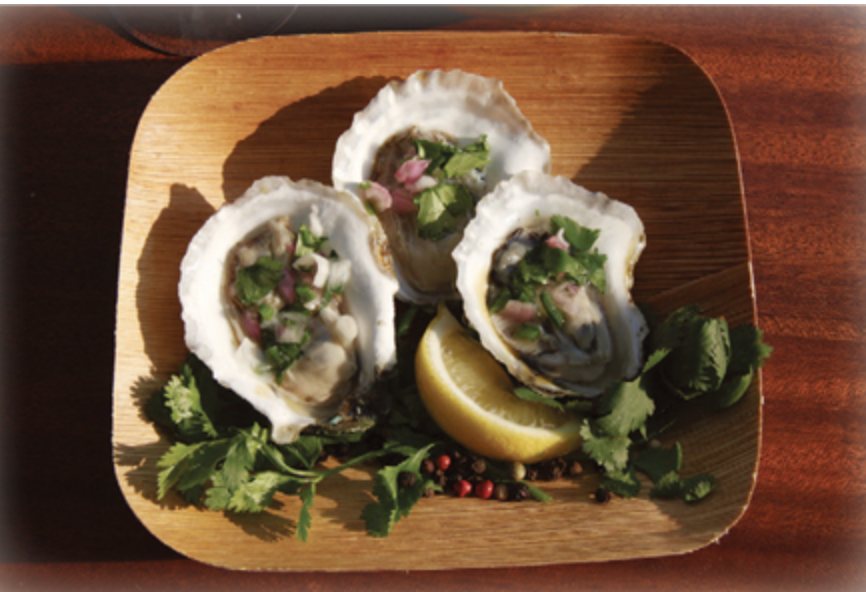 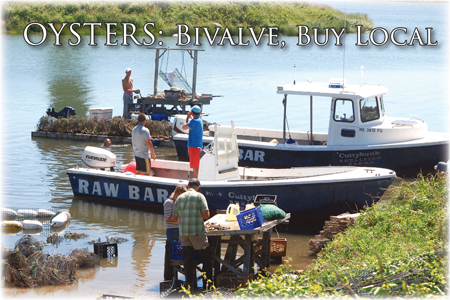 In industrial seafood farming systems, natural habitats are destroyed and supplanted with monocultures. Ironically, fishermen use destructive trawling methods across the ocean floor to gather fish to feed to farm-raised fish, undermining the rationalization of farmed seafood as a sustainable alternative. Wastewater expelled from fish farms—primarily fecal accumulation—dramatically pollutes the surrounding environment. Collective malaise is mounting at the thought of the ramifications of escaped farm-raised fish—which, genetically modified or not, carry the risk of adulterating wild stocks by spreading disease and by interbreeding. 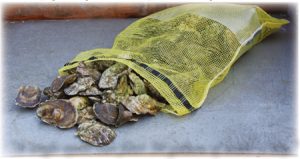 “A single oyster can filter 30 gallons of water a day.”

The farming of bivalves—oysters, mussels, and clams—shatter the stigmas of industrial aquaculture. The exponential popularity of oyster consumption mirrors a rise in their reputation and employment as bioremediators: bivalves are amazingly adept at cleaning up environmental pollutants like excess nitrates from agricultural (and residential) runoff. A single oyster can filter 30 gallons of water a day. They can restore waters so effectively as to increase biodiversity, creating the perfect conditions to encourage nearly 100 other species. Their shells are partially composed of calcium carbonate, a buffer that can offset acidification. They are, in a nutshell, just about everything that industrial shrimp and tilapia is not.

And, to boot, oysters are a native species. Their reintroduction as bioremediators has birthed nonprofits such as the Mass Oyster Project for Clean Water, dedicated to the restoration of the once-thriving- but-now-nearly-absent oyster in the Boston Harbor as a cleaning agent. For the local food movement, oyster farming has become a new business opportunity. 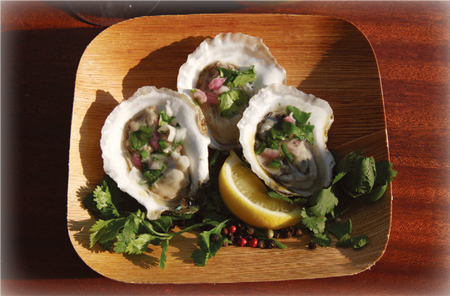 Oysters demand to be eaten—thus the variety of recipes.

At Riptide Oyster Co., Kerian Fennelly stands stoic amidst the biting winter winds, looking out over Westport Harbor. The gusts make for a less-than-ideal day to hop on the skiff and pay a visit to the first oyster farm in the Westport River. Kerian started Riptide seven years ago; he was a lobsterman selling to Cuttyhunk Shellfish, Inc., when the price for lobster crashed.

He resolved himself to begin anew.

Because aquaculture proper was unprecedented in the Westport River, there was no official protocol, so Kerian worked with the town to create one. “We were met with great resistance at first by some,” he recalled, “a sort of ‘tragedy of the commons.’” Some residents were uneasy about a private venture capitalizing on public land (or waters); others complained of a disruption to view corridors; others still lamented of an oyster farm competing for and depleting quahog food supplies—a particular absurdity, as there is currently more phytoplankton (the food source for bivalves) than either species could possibly keep up with. Yet Kerian’s persistence and persuasion prevailed, and the license was granted.

Because of their cleaning ability, oysters carry a much higher risk of contamination than lobsters or other seafood. Stringent regulations are in place for bivalves for this reason, often forcing those without the costly infrastructure to sell exclusively to wholesalers, who have the testing technology and traceability. Though they are not the local market Kerian envisioned serving, wholesalers are reliable and consistent for sales. Riptide Oyster Co. is in the process of becoming its own wholesaler, thus cutting out the middleman and ensuring greater flexibility with sales outlets. You won’t see their oysters in stores for now; though, if you’re dining in Texas, you may find them on your plate.

Since the demand only seems to be increasing, Riptide is appealing to the town to expand, with plans to open a second farm in the Westport River. “We’ve hit the ceiling in terms of production at our current farm,” Kerian noted about the appeal. “It means more investment, but with a guaranteed market and a native habitat, it’s likely well worth it.”

At Cuttyhunk Shellfish Inc., among the many other hats he wears on and off Cuttyhunk Island, Seth Garfield is the face you’ll see on the Raw Bar—a “farm to boat” floating oyster bar, serving boaters and beachgoers alike along the Cuttyhunk coastline. He and his wife Dorothy are the co-founders of Cuttyhunk Shellfish, Inc., an institution on the island. But the Raw Bar is not the sole means of conveyance—Cuttyhunk Shellfish is its own wholesaler, serving restaurants and providing seasonal catering services.

Seth grew up on Cuttyhunk Island. Following college, he began working in the power industry. One of his first jobs involved using warm water from power plants to grow shellfish hatcheries. In 1981, he and Dorothy began farming oysters in the West End pond on the island. They were selling their oysters the following year, and haven’t stopped since. “There are 3 or 4 new oyster farms per year,” Garfield noted of the popularity of bivalve aquaculture in southeastern MA and RI. “We are thinking of increasing our seed purchase by 30% for next year, because the demand seems to be there.” Seed in this case refers to the juvenile oysters from hatcheries that farmers use as nursery stock. 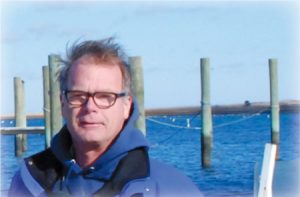 The Garfields’ enterprise has also enriched their professions as educators. “We’ve always been teachers of the sciences, but the farm has enabled us to practice it in the real world,” Dorothy noted. The farm is a veritable classroom, transcending text and theory to tangible applications. It is also a bedrock for the Garfields’ own children. “It has been a wonderful family opportunity,” Dorothy remarked warmly. “All of our children can run a boat and fix an engine. They are water children; they’ve lived it from the backpack on our backs onward.” The children are not only “farm strong” in their lived experience, but are a vital part of the energy and momentum behind the farm. “The family is invaluable in terms of cohesiveness and camaraderie” she continued.

It seems most aquaculturists in Massachusetts and Rhode Island have stories echoing the political and social drama exhibited by some in the community. “With a shellfish grant or aquaculture permit, you are giving up rights to public property… people have complained that ‘it’s in my viewscape,’ or have a story about how they have been sailing their sunfish there for decades and hate the sight of it. The town can deny permits based on this. Because license applications are infrequent, regulators don’t have a good grasp on their role. If you wanted to get a shellfish grant in Westport, for example, you might be boxed out because of a moratorium— they are zoning out aquaculture before people apply,” Seth explained.

Additionally, the rules and regulations are ever-changing, and according to Garfield, they are not getting any easier. “It could be 5 years before you are up and running: a year of paperwork, 2 years of permits, and 2 years of planting. Most of us are working part-time while we get our farms going. It is unfortunate when you see the cost of entry while the demand keeps increasing.” He proposes one potential solution: peer-regulated ‘best management practices’, to inform both the farmer and the regulator. “We, as an industry, have been doing a lot of work to educate our own. One of the things I’d like to do is come up with a guidebook for decision-makers, supported by the Mass Aquaculture Association, of the rules and regulations that govern our industry.”

Yet despite the obstacles to entry, Seth is emphatic about the opportunities ripe for oyster farming, as well as the ideological consistencies with the local food movement in general. “While the consumption of seafood is going up,” he remarks, “the harvest of wild seafood has either flat lined or is going down. In order to fill this gap, we need to have more aquaculture. The US imports 80% of its seafood… why should we be importing? Why can’t we grow it?”

“We need to be out encouraging more aquaculture, because as this demand increases we need to feed people,” Garfield continued. “Oysters are currently a luxury item . . . but the point of the story is that we as a nation could be reducing our trade deficit, we could be increasing more jobs here by growing local, and cleaning the water. There is money to be made . . . it’s no riskier than other businesses.”

Financial opportunities, indeed! But, as is the case with much of the resurgence in sustainable farming, the hard work brings with it a richer reward. “I love what I do,” Garfield declared, “because Mother Nature rules my life.”

Bill Braun is a vegetable grower and seed saver at the Ivory Silo Seed Project in Westport. He lives in devotion to the cycles of the seasons, and hears the beauty of the world resounded through a chickadee’s song. He also loves oysters. 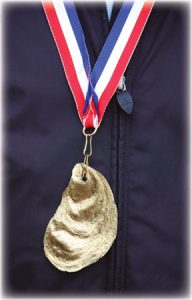 Wareham’s waters are an extraordinary resource for some of the world’s best oysters… and a best-kept secret! And our restaurants include some of the best in the region. What’s not to celebrate?

Our second annual Wareham Oyster Festival promises to be even more fun!

To kick off the day in style, join us for a fundraising Oyster Festival 5K run starting at 10 am on a course that traverses the waterfront.

The WVA will promote participating local restaurants in an “Oyster Trail” map throughout the week leading up to the festival, with all local restaurants encouraged to put one or more special oyster dishes on their menu that week. The week will also feature an informational speakers’ series.