From Sea to Shore: Paella on the Beach 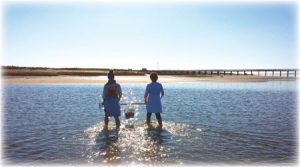 The prospect of making authentic paella over an open fire loomed enticingly for some time before the stars aligned and the magic happened. Several years ago we received a large, dimpled paella pan as a Christmas gift and in that wintery season, the thought of a luxurious warm day on the beach watching the shellfish open while the waves crashed seemed like a dream. I tucked the shiny pan into the top of the pantry with the full expectation that it would make its debut a few months later as summer bloomed.

Our summer schedules filled up with the needs of our teenagers and family visits. We would put “Paella on the Beach” on the calendar and it would rain, the winds would be blasting off the dunes or we would be just plain too lazy. There were, of course, those glorious days when we realized that “today” would have been the perfect day for “Paella on the Beach” if only we had planned ahead. The paella pan sat in the pantry closet as several summers came and went.

With our children off enjoying their new found independence, we too rediscovered a freedom we had left behind twenty years earlier. We put “Paella on the Beach” on the calendar for a late September Saturday and dug the paella pan out of the pantry closet. Jumping in with both feet, we invited two other couples to join in on our experiment. Not feeling entirely confident, I planned the meal for 4:00 pm so we could order pizza if our culinary adventure went awry.

I researched recipes while my husband explored the concept of cooking over an open fire. Sure we’ve grilled on the beach and opened clams over the fire pit, but neither one of us had turned back the hands of time and prepared an entire meal over a wood fire. We felt quite intrepid.

Paella heralds from the Valencia region of Spain as a peasant dish made with rice and spices as the base, with seasonal ingredients added. Chicken and rabbit are common proteins featured in the dish, while cooks in seaside communities use local shellfish. There are as many interpretations of paella as there are paella pans, which left me wide open when it came to choosing my ingredients. In the locavore spirit, I imagined our southeastern Massachusetts paella would include clams dug from our neighborhood sand flats, smoky Portuguese chouriço, and seared local chicken thighs. Using dead-ripe garden tomatoes and deeply flavored peppers, like the Corno de Toro or Jimmy Nardello varieties grown locally these days, would create a signature summer dish.

While I could play with protein and vegetable selections, there are a few indisputable ingredients that must be present in authentic paella. The perfect rice is critical, as is using the correct technique to cook it. According to Spanish cookbook author Penelope Casas, “Paella is not a steamed rice, cooked in a covered pan, but generally a ‘dry’ rice that cooks uncovered in a wide, flat paella pan. It is not bright orange (that comes from artificial coloring) and it is not a precooked pot of Uncle Ben’s rice to which lobster, chicken, and clams that have been strewn on top to give a pretty appearance and to disguise what is usually very ordinary rice.” I was lucky enough to have a bag of Valencia rice I had received as a gift from a Spanish friend so only needed to swing by Whole Foods Market for sweet pimenton, and saffron.

The best part of procuring local ingredients was the clamming on the bay. Our designated weekend dawned uncannily warm and welcoming for late September and a few gratifying hours on the flats yielded a basketful of clams.

The next step was preparing all I would need to cook and serve the paella away from the comforts of my home kitchen so I created a thorough packing list (see sidebar) and allowed several hours to prep and pack the food and supplies.

We couldn’t have asked for a more perfect late September day and could never have anticipated that the ocean would be unexpectedly comfortable. While I swam, my husband got the fire started, as it needed to burn for an hour to an hour and a half to create the perfect hot coals.

The afternoon was spent alternately swimming, paddle boarding and going through the steps to make the paella. Sweatshirts were donned, bottles of wine were popped open, salads laid on the table and with great anticipation, the paella was served. Success! The true test would be if there was a soccarat, a dark earthy crust underneath the layers of shellfish and rice, and indeed there was. 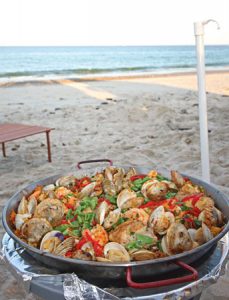 We lingered long after dark around the fire with our eyes fixed on the stars overhead already dreaming of next summer’s culinary adventure.

Recipe: PAELLA ON THE BEACH

When not at her desk job, Michelle Roden Conway gobbles up recipes, cooks up a storm, randomly writes food articles, and invents culinary adventures for her family and friends.