locavore Abroad • The Dhow of Moz 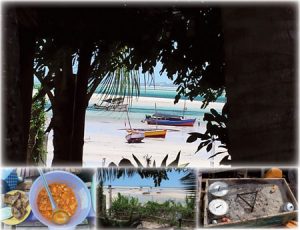 The southeast coast of Africa—Mozambique to be precise—sits 8,000 miles from the southeast coast of Massachusetts. With the iridescent Indian Ocean hues lapping 1,500 miles of coastline, Mozambique is a blend of African, Arabic, and Portuguese cultures. These blended influences are apparent everywhere: the vibrant capulana fabrics worn by women (African), brightly-painted dhow sailboats (Arabic), and aromatic Calamari Tomato Stew rich with native squid (Portuguese). When they all come together—well, let’s just say, it’s paradise.

We were in Mozambique via Cape Town, after celebrating our oldest son’s graduation and exploring landscape of captivating natural beauty. We then flew to Johannesburg, continuing our African adventure with a 765-mile self-drive trek to Mozambique. Our son, aka tour guide, knew of a perfect place for us to rest our heads and get off the road for a few days, and luckily for us, that place was Vilankulo, Mozambique. We arrived to a full moon rising over the Indian Ocean, and a spectacular bowl of ‘peel and eat’ Prawn Scampi…little did we know, the best was yet to come. 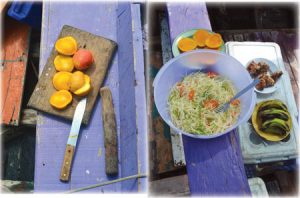 Sitting atop the southern third of Africa’s fourth largest coastline, Vilankulo is the gateway to the Bazaruto Archipelago. The Archipelago, surrounded by coral reefs, serves as home to over 2,000 species of fish, multiple species of whales, turtles, dolphins, and the shy, endangered Dugong. To view this beauty, dhow sailing safaris run snorkeling day trips to a choice of the archipelago’s five islands, complete with a three-course lunch.

Dhows have been sailing the Mozambican coastline for the past 2,000 years when the Arabs arrived on the 25-foot wooden, thin-hulled structures with lateen sails. Brightly painted, with boards sewn (now nailed) together, dhows ventured to Persia, India, and China, playing an integral role in the Swahili and Indian spice and slave trade routes. Today, local Mozambicans use dhows for fishing boats and transportation. Our son assures us this excursion is a must, so we follow his lead.

We board our purple-painted dhow as our skipper, Miguel, and our cook, Jerry, load fresh mangos, bananas, and cabbage. A huge kingfish and morning-caught squid staying fresh in a cooler, complete our provisions for the day. Anchor up, our adventure begins! Our guide, former Parisian Dom, gives us the day’s itinerary. Waxing fantastic about his aquatic ‘office’, he’s interrupted by a whistling teakettle, and our guide politely asks if any of us would like coffee or tea. Excuse me? We are on a wooden boat surrounded by crystalline waters—how are we heating water? At the feet of our trusty skipper, rests a 4’x2’ wooden box filled with ash, sand, coal, and an equilateral triangle of piping that creates the cooking surface. That’s right, a controlled fi re in a wooden boat on the Indian Ocean. Pure Moz! Ahh, sipping tea, skimming along blue waters that blend into the horizon, we are on sensory overload. All this before our snorkel in The Aquarium section of Two Mile Reef and lunch on Bazaruto Island!!

Jerry’s dhow cooking talents are as mesmerizing as the white-sanded island beaches and the bluer-than-blue seas, as he works fastidiously by the sandbox slicing, dicing, peeling, and paring in an efficient, but laid back rhythm. He uses the wood slats of the boat as his chopping surface, and the ocean to rinse. We’re not quite sure what he is making, but he’s working so deftly and we’re feeling guilty going snorkeling while the crew keeps the lunch preparations moving. Things take time in Mozambique, and as we’ll soon learn, are always worth the wait.

Emerging from our underwater exploration of psychedelic fish and coral, we can smell the efforts of Jerry’s hard work—sautéed onion, garlic, curry, and turmeric blending with the salt air, but it’s early yet. Miguel steers us to Bazaruto Island. Setting anchor just off – shore, we wade onto the island. While Dom, and his 12-year-old son Angelo, lead our climb up a 300 foot dune with jaw-dropping views, Jerry and Miguel make the final meal preparations. Our crew has the timing down to a science. We alit the dune, swim to the dhow, and are greeted with a Mozambican feast—kingfish marinated in oil, lemons, garlic, and vinegar, and the freshest, most mouth-watering, calamari tomato stew!! Succulent and tender squid holds star status in the stew also brimming with onions, potatoes, garlic, and tomato. Touched off with the ubiquitous Piri Piri sauce, it has a great kick, and the rice and Pao (a Portuguese bread) absorbs all the flavors. Our palettes enjoy the coolness of a fresh slaw against the spicy stew, roasted bananas and juicy halved mangos top off our feast. We are in Moz heaven! 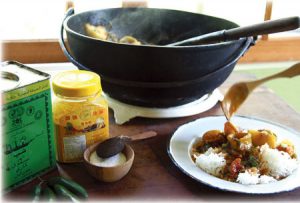 Completely sated, it’s time to head back to Vilankulo. Skimming through the turquoise waters, sails raised, we marvel at our surroundings and the beautiful, bountiful meal we had just enjoyed aboard our squeaky, yet trusted dhow. Another aroma fills the boat, familiar though we can’t quite place it. Dom grabs a metal bowl from Jerry, “Popcorn, anyone?” Dom inquires. Are you kidding me? “And we have some lychee juice too. Here, try some.” We are at a loss for words, but happily partake. When we anchor back in Vilankulo, we gushingly thank our crew and commend Jerry on the best meal to be had this side of the equator.

Our innocent adventure to Vilankulo turned into a love affair with Mozambique’s people, blended cultures, food, and 1,500 miles of Indian Ocean coast. Living in southeastern Massachusetts with its strong Portuguese traditions, we were fascinated to see the same influence on Africa’s distant shores. As our truck rumbled back to our hut, we relaxed into a ‘Moz glow’, knowing our day on the dhow, like true love, would be in hearts forever.

Terry Vandewater is assistant editor at eSS&SC. To extend the Moz glow, she and her family have replicated as many Mozambican recipes as possible. With summertime finally here, they look forward to moving the culinary laboratory to the beach. 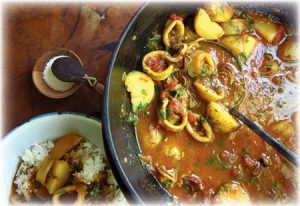