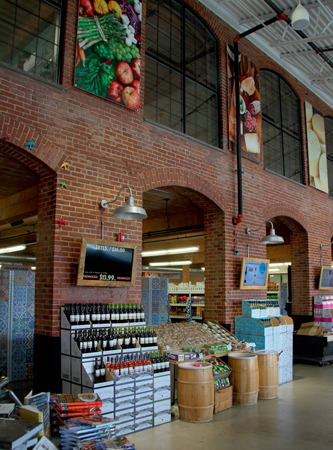 The best way to get to know someone’s culture is to get to know their food. That’s one reason why TV travel shows often feature chefs as hosts and focus on food markets and restaurants; food and culture are intertwined. Viewers learn about places they want to see for themselves and travel to new countries specifically to try the local cuisine. A whole industry has sprung up around “food tourism,” or going beyond your town borders to try something new. For some, the idea of doing this is too daunting, time-consuming, or expensive, but it doesn’t have to be.

Massachusetts’ South Coast region was the landing place for tens of thousands of Portuguese immigrants during the last century. Many landed in Fall River and New Bedford; even today, out of 88,000 of Fall River’s residents, 49% are of Portuguese heritage. With so many Portuguese people in one place, you wouldn’t be wrong in thinking that there are some wonderful places to experience Portuguese food and culture.

Portugalia Marketplace is the perfect place to begin your local food tourism excursion into the Portuguese culture. Conveniently located in central Fall River and right off Interstate 195, it’s easy to find and well worth your time. 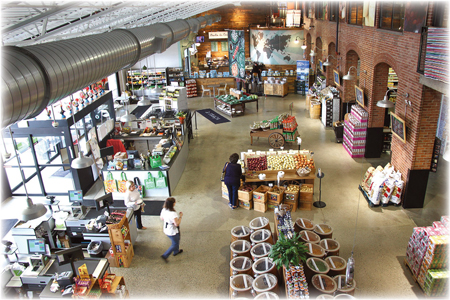 Portugalia is a family-owned business, founded and run by Fernando and Maria Benevides along with their children Michael and Jennifer Benevides-Costa. They started selling imported coffee to local restaurants and then expanded to include salt cod. Soon, they were selling out of their garage to local customers and adding more products to meet demand. In 1994, they opened their first location at the corner of Tremont and Bedford streets, and just three years ago moved to their current, much larger and much-needed location.

Inspired by the local food markets found in the Azores and other Portuguese communities from around the world such as Brazil, India, and China, Portugalia makes its home in a former textile mill that has been completely remodeled to provide an amazing sensory experience every time you go. Inside the building, you’ll find yourself transported to the Azores, with all the same foods, sights, and smells of their markets. There’s a lot to see: let’s take a tour. 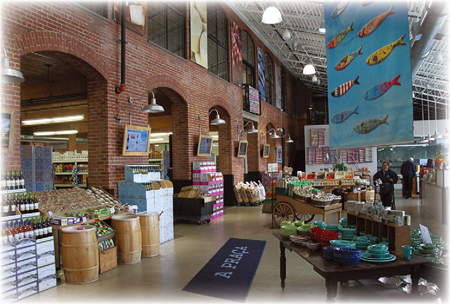 When you first enter the store you are in the praça or town square area, well stocked with produce, fresh fruit, nuts, and legumes. All are fresh and many are imported from Portugal when in season. The Azores are semi-tropical islands in the middle of the Atlantic Ocean, and their climate is suited to growing the most delicious citrus fruits and distinctive pineapples. Portugal has long supplied citrus to her northern and eastern neighbors; a winter variety of orange was so popular in London in the 1800s that it was named St. Michael’s after the island they were grown on.

Azorean pineapples are a real treat. Savvy growers developed a method of using greenhouses, and even smoke, to compensate for the not-really-tropical climate, and the final result is a smaller than usual fruit with a very intense flavor. Used in several signature Azorean dishes, pineapple is also used to make wonderful liquors and jams which are also available at the store. 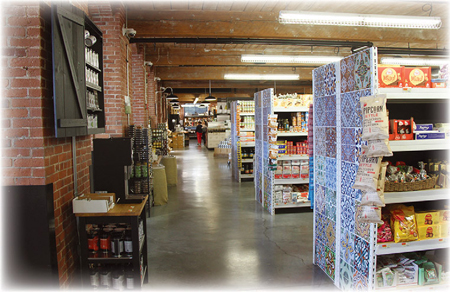 The center of the store is the mercearia, or grocery section. Each aisle is a treasure trove of Portuguese specialty items like olive oils, canned fish, piri piri sauces, and dry goods. Other exotic offerings include artisanal jams, crackers, cookies, coffees, and teas.

Portuguese olive oil is truly a hidden gem. Olive trees have been growing in Portugal since the Bronze Age (2300 BC). As with wine, the age of the plant, the soil and surroundings affect olive oil’s flavor. Many people taste olive oil the same way they taste test wine, and at Portugalia there are usually samples of the various olive oils set out for you to dab and taste with small pieces of bread. Discovering for yourself which oil is sweeter, saltier, or more bitter makes for a truly interactive learning experience.

Canned tuna and sardines can also be found in the mercearia aisle. Canned fish is a staple in many Portuguese households, and with Portugal’s rich history with the sea, it also shouldn’t be a surprise that they produce and ship 500 million cans of fish per year to the rest of the world. The Portuguese favor canned tuna themselves, but find that their canned sardines are in greater demand outside the country. On Portugalia’s shelves you’ll find both tuna and sardines, as well as a variety of canned mackerel and eel. Many are packed in Portuguese olive oil or infused with delicious flavorings; you’ll surely find a new favorite.

Before you leave the mercearia area you will need to check out Gorreana tea, grown on the island of Sao Miguel on Europe’s only tea plantation and operated by the same family since 1883. The English may be stereotypical tea drinkers, and that’s true, but the Portuguese, specifically Queen Catherine (Catarina de Braganca), wife of Charles II from 1662 to 1685. Their marriage contract included a chest of tea, along with lucrative trade privileges with Brazil and the East Indies.

Gorreana tea is grown free of chemicals because there are no natural diseases or insects on Sao Miguel to threaten plants. The climate is perfect for growing tea, and the plantation is scenically situated overlooking a beautiful valley that leads to the ocean. Their green tea is quite mellow and popular even with many folks who don’t normally enjoy green tea. 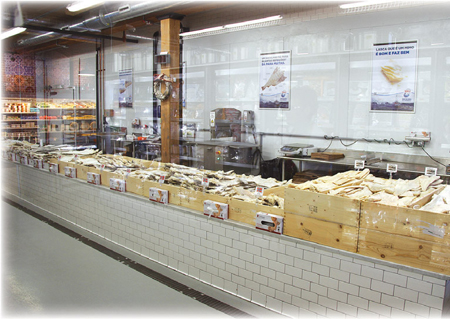 The congelados (imported seafood) area is unlike anything you’ve likely seen before. The centerpiece of the display is the O Fiel Amigo, a temperature-controlled room offering a large variety of salt cod. Here you can choose dried cod from Norway and Canada and have it cut to order. Don’t worry if you don’t know what to choose, the staff here is expert in understanding and explaining all that is on display.

Outside the O Fiel Amigo are smaller freezers with a variety of frozen fish and octopus. The Portuguese prepare octopus in many different ways. Each of the nine Azorean islands seems to have its own preference—roasted or stewed, with or without potatoes, with or without tomatoes. If you’d like to try one of these dishes at home without having to prepare it, visit the Cozinha Regional counter where a variety of prepared foods are available. There’s often an octopus dish available, prepared on-site in a traditional Portuguese manner. 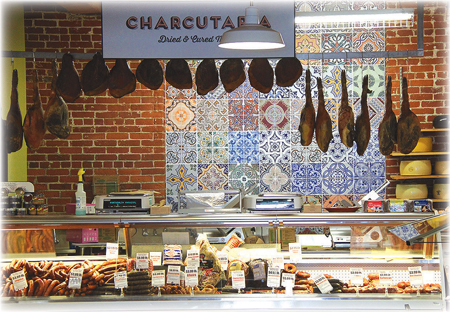 Sharing the same corner of the store as the cod and octopus is the Charcuteria, with a mouthwatering assortment of dried and cured meats and sausages. There are also dozens of cheeses and dairy products imported from Portugal for you to consider and taste. There’s Queijaria De Sao Romao, a traditional dry, cured sheep cheese to try, or maybe you’ll want to bring home some cured goat cheese. If those aren’t for you, there are more traditional cow milk cheeses of varying ages or infused with spices. 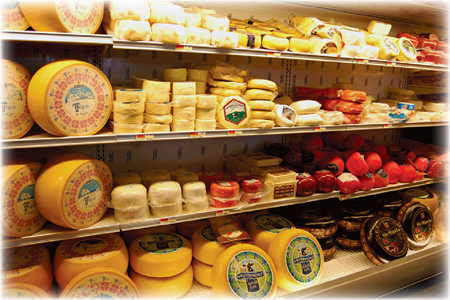 Cheese making began on Sao Jorge in the mid-1400s when theDutch settled on the island, bringing with them domesticated cattle. Due to the climate and pasture lands the cows thrive and are considered “happy cows”; they now outnumber people 2 to 1. Because they’re happy they can produce delicious milk, resulting in wonderful butter and cheeses. Three types of cheese from Sao Jorge to consider are Topo, três meses, and set meses. Topo is typically three months old and is a very buttery, fatty cheese and perfect for melting and ready to eat. Três meses is also three months old and is buttery, has light sharpness, few holes and is not crumbly. At seven months, Sao Jorge sete meses is sharper and has more holes; its smell is more pungent and it crumbles easily. Both ages are delicious and available for sale. If either really satisfies your taste buds you can purchase a 15-pound wheel of cheese to take home with you. 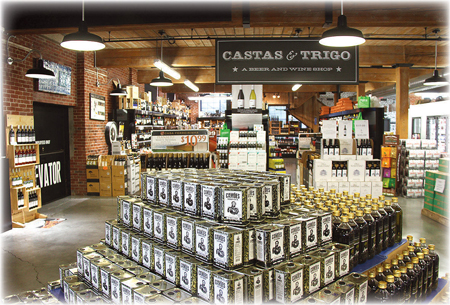 No trip to Portugalia is complete without a stop in the Castas & Trigo section for beer and wine. It’s well stocked with bottles from a variety of nations, but here is truly one of the largest selections of Portuguese wines available. In recent years Portuguese wines from the Douro and Alentejo regions, as well as from the Island of Pico, have become very popular. On many weekends you’ll find representatives from vineyards and distributors on hand for wine tasting. There’s no better opportunity to learn about a wine than to speak with someone directly from the vineyard or someone who visits the vineyard regularly. That’s the experience you can get at Portugalia throughout the store; there’s a knowledgeable person in every section willing to help guide you towards a tasty experience. 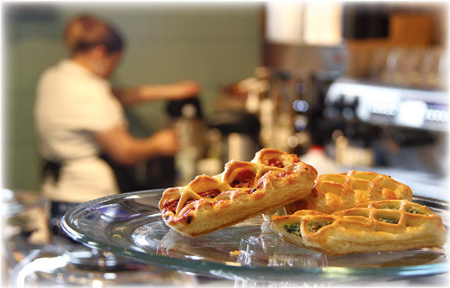 At this point, you will have been in the store for a while and may need to rest your feet. Right next to the wine section is the Ponto de Encontro, a café offering espresso, cappuccino, pastries and a variety of fresh sandwiches. Many people come to Portugalia just for the charm of this corner of the store and meet with their friends and family here over an espresso and a queiada de nata, or Portuguese cream tart.

You can easily make a day of your visit. Don’t wait until you have time to go overseas to start your food tourism: make Portugalia in Fall River the first step in your journey. 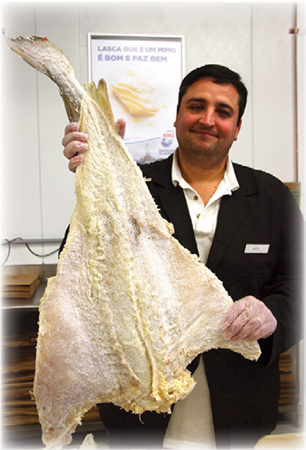 Because our islands are surrounded by the Atlantic Ocean, fish has always been in abundance and a big part of the Azorean diet. Bacalhau is a salt-preserved codfish—split fish that have been heavily salted to draw out the moisture and then air-dried. As a child, I remember seeing bacalhau hanging on clotheslines as well as in the fish markets.

On Friday nights Mom would often make a salted cod dish consisting of boiled cod and potatoes with a parsley sauce over it, a staple in my home. After marriage, I tried making the same dish but was very intimidated by the whole process of cooking with it. Substitute fresh cod and no one would know better? Boy, was I wrong! The flavors cannot be compared; salted cod has a slightly salty, more intense flavor than fresh cod. Overcoming my fears, I realized it was a very simple process. So if you haven’t cooked with salted cod, here are my helpful hints on preparing it.

When purchasing salted cod make sure to pick out a piece that has a thick center. Avoid the fillets that contain more tail than anything else, as that part is so flat and has very little meat. Also, check to see if the cod has bones or not. I prefer the boneless and skinless portions, but note that it usually costs more for that convenience. Some people will disagree and say that salted cod with bone has even more intense flavor. 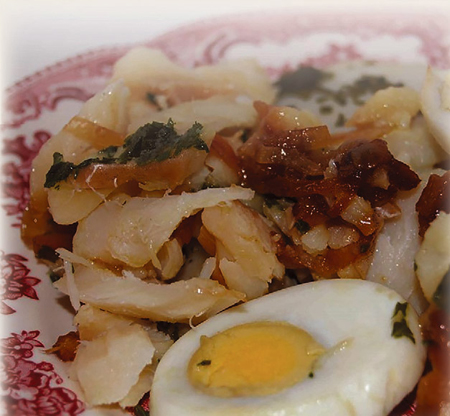 Before cooking salt cod, you need to soak it in water. Length of time depends on the thickness of the fish as well as your preference of salty flavor. Liking it fairly salty, I usually choose the shorter overnight routine. First, rinse the salt off, and then place in a bowl large enough to submerge the whole piece. Soak it for 12-24 hours, depending upon its thickness (refrigerate it in hot weather), changing the water 2-3 times daily.

On the last soak before cooking, you can substitute milk for water. Both my mom and my aunt would say that using milk for the last soaking makes the cod moister. And I agree.

Maria Lawton was born in Sao Miguel, Azores and currently lives in Massachusetts’ South Coast. She is widely known as the Azorean Greenbean and is the author of the bestselling cookbook Azorean Cooking, From My Family Table to Yours. She co-hosts “Our Portuguese Table” Podcast, and is currently filming a series called “Maria’s Portuguese Table” for PBS.