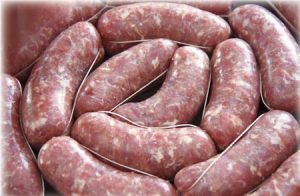 Maybe about the third time we visited the Hanover home of Laurie and Stephen Feeney—this is back a few years when they were new friends to us—something remarkable appeared on the appetizer table. Don’t get me wrong, the food had always been good before, and the sense of hospitality impeccable. But on that visit, next to the Caprese salad there sat this little plate of odd-shaped, almost translucent, mahogany-brown slices. Upon closer analysis, one of these chunky little units was most certainly exuding a complex and delicious aroma. Further sensory sampling revealed that the specimen was chewy, flavorful, and utterly addictive. Mildly salty, very meaty, and with a fleeting fennelly note and a uniform resilient texture, it was unlike anything I’d ever eaten before. And it was certainly nothing I expected to find offered on a kitchen island in very suburban Hanover. Silly me.

I noticed Laurie watching me. “Oh that’s just the sausage my family makes,” she tossed off. I must have raised my eyebrows. “Oh, well, yeah” she said, “one weekend each winter we all get together, my Nonnina, my uncle, my sister Lisa, and our families, and we spend the whole two days cutting and grinding and curing and stuffing. . . I wasn’t sure you’d like it.”

Apparently, our first few visits had put us over a “no-pearls-beforeswine”* barrier as guests, and the reward was pretty incredible. Better yet: “Oh sure, you can come help next winter. We’d love to have you.” 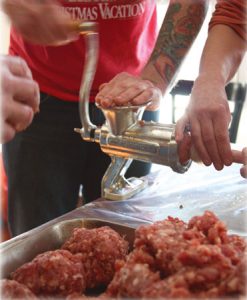 * to offer something valuable to someone who does not understand that it is valuable. 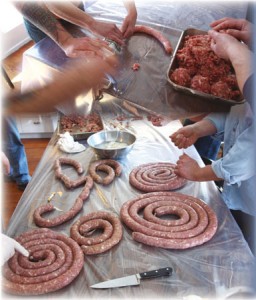 With one thing and another, it took us years to get to Sausage Weekend. Sadly, the Nonnina who drove the operation passed away in 2007, but the family still carries on her sausage tradition. Laurie’s sister Lisa’s husband, Al Calderone, has taken up the mantle, and leads the proceedings admirably. Under his management, a few things have changed. A high school science teacher, Al has done his research on food-borne illness and been moved to employ the curing salts, and even the measurements, at which his grandmother-in-law would have scoffed, to bring the recipe in line with accepted meat-curing practices of 21st-century America. And although I am quick to eschew nitrates and nitrites in general, I have enough respect for the workings of anaerobic bacteria to appreciate the efficacy of these objectionable salts in certain conditions.

Throughout our Sunday in the Calderone kitchen, friends and family popped in and out, jumping in the sausage-stuffing line wherever a hand was needed. Al and Lisa kept everything moving, giving pointers here and there and reminiscing about bygone relatives, especially the Nonnina of the sausage. They also kept delicious snacks and drinks coming. The kids, Mia, 14, and Dante, 10, stopped in to help and kibbitz in between soccer games and other obligations. By Sunday afternoon the curing chamber — really a section of the Calderone family basement, a former garage bay known to have perfect conditions — was festooned with many yards of neatly tied links settling in for a fortnight of slow drying. 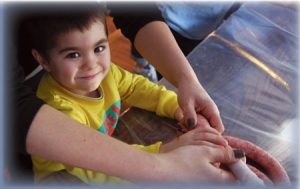 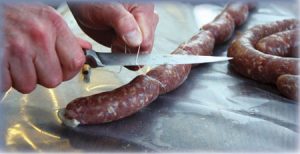 All hands team together on sausage weekend. Nonnina’s traditiom is passed on to the next generation.

It seems that after coming over from Italy, Laurie and Lisa’s grandmother, Caterina Serra, besides being an all-round great gardener and cook, developed a knack for recognizing ideal meat-curing spots in the otherwise unremarkable nooks and crannies of suburban America. After years of curing trials in the homes of many acquaintances and family members, she came to favor the above-mentioned spot in the Calderone basement above all others for the completion of her signature sausage.

It happens that temperature and humidity conditions become perfect in that space rather late in the winter, pushing this family’s Sausage Weekend into February. Since the family has been purchasing meat from a trusted butcher, rather than slaughtering their own hog, the timing matters less than back in Italy, where families processed meat from their own animals as a matter of course. (Al and Lisa don’t rule out raising their own hog someday, though.)

Hog-butchering time has traditionally been when the first cold weather sets in—at the end of fall, start of winter. The animals have grown fat on autumnal forage like chestnuts, acorns, and beech-nuts. And the cool temperatures allow for the quick chilling of carcasses and the proper curing of foods meant to keep through the year—hams, bacon, jowl meat, and, yes, sausage—salted away in cellars and attics throughout the countryside—and in some cases, as I’ve learned, even the ‘burbs!

* to offer something valuable to someone who does not understand that it is valuable. 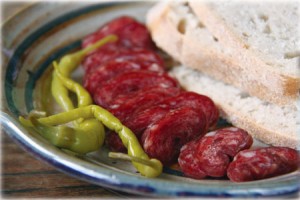 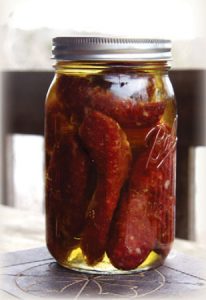