A History and How-to 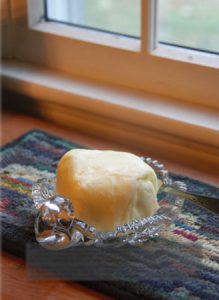 Both adults and children will enjoy one of those “oh, that’s how it’s made” moments.

Mmm… butter. It makes piecrust and pastries both flakey and flavorful. It adds rich creaminess to savory sauces. Without it, toast and popcorn feel a tad naked. Melted, butter is the go-to condiment for an entire clambake of southeastern Massachusetts delights: little necks, corn-on the cob, lobster…ironic since, unlike the clambake itself, dairy was not traditionally part of the diet of New England Native Peoples.

Butter immigrated here as a standard provision in European sailing ships. (In fact, before departing England in 1620 the Mayflower—of Pilgrim fame—sold the extraordinary quantity of roughly 4,000 pounds of butter to clear debts, yet still carried enough of the salt-preserved fat to serve to Mohegan native, Samoset, eight months later.) Eventually, cows also made the sea-crossing and began establishing themselves as our country’s primary dairy source.

Across the globe, humans have been enjoying butter in their diets for an estimated 4,000—6,000 years, but does that mean it’s good for us? The answer to this question has been the subject of controversy in more modern times. By the late 1950s, the ‘war’ between butter and margarine, fueled in part by powerful trade lobbies and ever more sophisticated marketing campaigns, became a battle about good health. Before that, margarine had simply been an economical choice, then a patriotic necessity due to wartime butter shortages. But late 20th century science and admen taught us that animal fat was bad and laboratory-manipulated food was better. If you are an adult who buys groceries, and cares even a little about what you ingest, then you’ve had to navigate this dilemma. For me, butter clearly tastes better, so I long ago decided that thousands of years of dietary customs couldn’t be entirely wrong! (Admittedly, unlike our ancestors over the millennia, few of us work the kind of dusk-to-dawn outdoor physical labor that mandates a significant intake of fat for survival.)

Margarine has long been touted as the heart-healthy choice because of its low cholesterol unsaturated fats. However, as research has uncovered the dangers of the hydrogenated and resulting trans fats found in many margarines, the pendulum is now swinging towards a more common sense approach embracing moderate amounts of natural saturated fats, like butter. Nonetheless, U.S. butter consumption was at an historic low as recently as 1997 and, while trending upward since, has only surpassed that of margarine in the last year or so!

Americans are collectively eating more butter than we have since the early 1970s, although, according to the USDA, 1911 was our biggest butter year. During the ensuing century, dairy production, distribution and processing changed as dramatically as did buttereating habits. One hundred years ago, southeastern Massachusetts was home to scores of small dairies even as hundreds of families still milked a cow or three of their own. As the number of local dairies decreased, the distance in time and space from cow to consumer increased. Deadly outbreaks of milk-borne illnesses fueled regulatory eff orts and social movements aimed at assuring safe milk, especially for babies. These were among the factors that, in the last century, resulted in the legally prescribed milk-handling practices that are now largely accepted as normal: refrigeration and pasteurization. 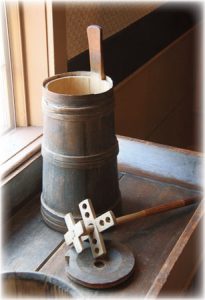 Late 20th century science and ad-men taught us that animal fat was bad and laboratory-manipulated food was better.

During the same period, the quest for uniformity and consistency in the marketplace made homogenization of milk standard practice, and gave us legal requirements for the fat content of whole milk (3.25%) and fat-free or skim milk, followed by further gradations of 1% and 2% milk, as well as whipping, heavy, and light cream—it doesn’t come from the cow that way! These changes have all affected butter and milk alike, where we get it, and what it tastes like.

Have you given any thought to the butter you choose? Perhaps you’ve always bought the same brand, or maybe organic or local is what’s important to you. We are spoiled for choices even in mainstream supermarkets—let’s face it, most of us don’t make our own. What about the taste? Butter is butter, right? Well, not necessarily. Butter is made from cream which is basically the fat separated from the milk. The butterfat content of milk varies quite dramatically with the breed. Holsteins, the iconic (and high-production) black and white cows that make up 90% of the U.S. dairy herd, yield milk with an average butterfat content of only 3.4% as compared to Jersey cow milk that averages 5.13% butterfat. No matter the breed, the flavor and nutritional values of the butter depend on what those cows eat. Now that I’ve said it, it seems embarrassingly obvious doesn’t it? But I never gave it much thought either. Just as grass-fed beef has a distinct flavor and nutritional profile, so does naturally golden yellow cream from grass-fed cows. 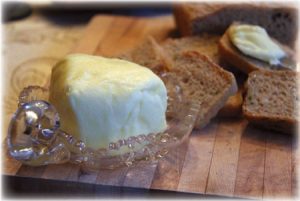 If the marketing of your favorite big brand of butter doesn’t claim that the cows are fed grass, then don’t assume they are, even if ‘happy’ cows in bucolic pastures are pictured. In the commercial dairy industry, cow feed is necessarily a rigorously managed system of specific inputs to gain maximum output, with wide variation from farm to farm in the proportion of grass included, as well as in how much time the herd spends on pasture. Two readily available commercial brands that are made with cream from grassfed cows are Kerrygold Pure Irish Butter (sometimes displayed in the cheese section) and Organic Valley Pasture Butter (made in the summer grazing season in Wisconsin.)

If closer-to-home is more important to you, try Kate’s Homemade Butter “made the old-fashioned way, churned slowly in small batches … with fresh cream from New England dairy farms that pledge not to use artificial growth hormones.” Cabot Creamery Butter is another option. Cabot “is a cooperative of 1,200 dairy farm families located throughout New York and New England,” Historic O’Neil Farm in Duxbury is one such. You can find both Kate’s and Cabot brands in most grocery stores. For butter that is truly local from start to finish, Hornstra Farm sells their own from their farm store in Norwell or via home delivery.

You can always try making your own butter. It will taste at least as good if not better than most store-bought brands, though typically not as economical or long-keeping. The quality of cream is the determining factor for the quality of the butter. Making butter is so easy even young children can do it and making it with kids is just plain fun. Both adults and kids will enjoy one of those “oh, that’s how it’s made” moments. So give it a go, at least once. In addition to a tasty treat, you’ll end up with a greater appreciation of your butter options the next time it’s on your grocery list.

Butter has been enhancing our cuisine since ancient peoples first kept dairy beasts, and we’ve been in love with its creamy richness ever since. Whether it’s store bought or homemade, everything just tastes better with butter. So smear it over crusty bread, create a spectacular Hollandaise, or melt butter over some freshly popped corn. Mmm…delicious! 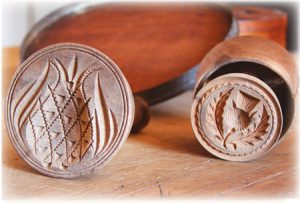 Make your own Butter

To make butter all you need is heavy cream and a covered container. The more cream, the longer it takes. This “recipe” gets you there before boredom or frustration can set in, with enough butter to taste immediately plus a couple of knife-swipes to enjoy later.

Pour cream into the jar up to the 2-ounce mark.

Cover tightly and shake. Keep shaking. At first you get unsweetened whipped cream; keep shaking until it feels and sounds different. Take a peek. You are done when the butter has quite obviously and completely separated from the buttermilk. Pour off the buttermilk. Save it for another use (but don’t expect the signature tanginess of traditional or cultured buttermilk, unless you happen to have started with ripened, unpasteurized cream).

To wash your drained butter, add a couple of ounces of very cold water. Cover and shake a little more, then pour off the water. Add a pinch of salt if you like. If you aren’t going to use it all at once, continue washing until the water runs clear, then pat it dry.

Of course, you can always make larger quantities with an electric mixer or a blender.

If you would like to flavor butter, add to newly made or store-bought softened butter your choice of puréed fruit, ground spice, chopped herbs, chopped or ground nuts, honey or maple syrup. Mash your butter into molds or pretty serving dishes, cover, and refrigerate.

Lisa Whalen is the Education Coordinator at Historic O’Neil Farm in Duxbury, one of the few remaining working dairies in southeastern Mass. Late spring through early fall, the Farm offers tours and hands-on enrichment programs, including butter making.