Yellow: The Color of Happiness 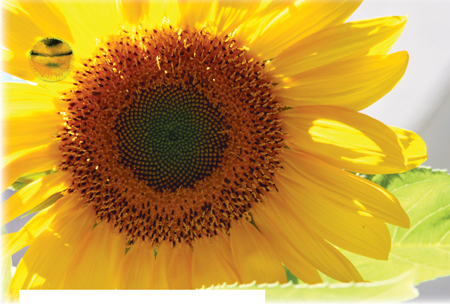 On car trips as a little girl, we drove by fields and fields of taller-than-me sunflowers. Big, heavy, yellow heads tracked the sun across the sky, absorbing the shine. In the morning, thousands of sunflowers would watch us on our outward journey. Coming home, the sunflowers had their green backs turned and we couldn’t see their lovely faces. They always stood in unity. All for one—the sun. 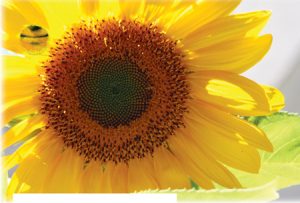 Like the flowers, sunflower oil was a bright yellow staple during my childhood. I remember the familiar bottle of translucent yellow liquid my mom reached for when doing a monthly grocery shop. It was present for salad dressings, cakes, and our regular Monday night steak, eggs, and chips. The A-Team was on TV before the news, and we sat with our dinner on our laps in front of the television to watch our favorite gritty, gruff, pretty, and slightly nutty champions save the day, just before giving the Colonel the slip. Like the A-Team, the pretty, slightly nutty, excellent high-heat performance of sunflower oil delivered a winning meal at the hands of my mother that delighted and comforted week after week.

You can imagine my disappointment, then, to find it missing from the shelves of the local grocery store when we moved from South Africa to Marshfield! Of all the choices that were on the shelf, none of them seemed quite right. Then I discovered the truth about GMOs (genetically modified organisms) and no longer wanted to use oil made from corn, soy, or canola, which left me only with olive oil or coconut oil from which to chose. 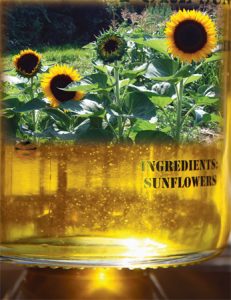 You cannot deep fry a potato in olive oil. And it doesn’t excite me in cakes either. Coconut oil is okay, but it’s not the same. I craved the rich sunshine color and mild flavor.

After years of going without, I was euphoric to not only stumble upon some sunflower oil, but discover it was LOCALLY GROWN—and we have beer brewers to thank! Sunflowers are an excellent cover crop in between hops plantings, and with the boom of indie-brewers, sunflower oil is becoming more readily available. It is the only oil that is locally grown here in New England, so keep an eye out for it at your farmers’ market! I got a bit ahead of myself the first time I saw it and bought two five-gallon tubs of Full Sun’s Vermont-grown and pressed sunflower oil. My husband, who has grown accustomed to my quirky curiosity in the kitchen, eyed me suspiciously as I lugged the two big oil vats into the kitchen and heaved them onto the counter. I was giddy!

Baking with sunflower oil is akin to true happiness. Who doesn’t want a birthday cake made from sunflowers? Its versatility lends itself to salad dressings too, but it is my mom’s home-made fries that I have missed the most. Probably because they didn’t need a special occasion to make an appearance—any reason would do. Good report card, bad report card, breakups, new boyfriend, new job, getting fired; these fries (or chips, as we like to call them) soothe, comfort, congratulate, hand out high-fives, and satisfy like no other.

Pamela Denholm was born in Rhodesia (now Zimbabwe) and raised in South Africa before moving to the United States. She loves chips, bunny chow (not made from bunnies), monkey gland sauce (not made from monkeys), and biltong, as well as clam chowdah, lobstah, baked beans, and apple pie.