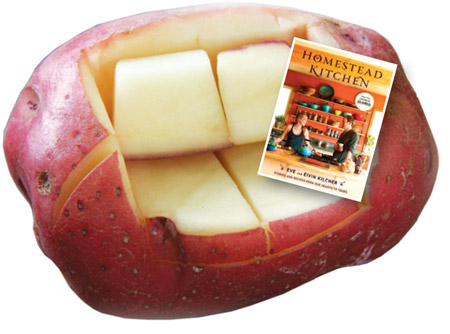 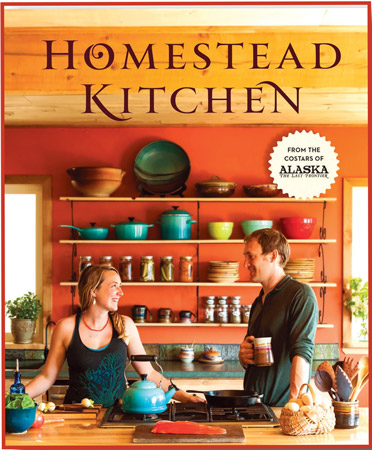 Eve and Eivin Kilcher may be best known as the co-stars of Alaska: The Last Frontier, an American reality series currently in its sixth season on the Discovery Channel. The show documents the extended Kilcher family, descendants of Swiss immigrant and Alaskan pioneer Yule Kilcher, at their homestead 11 miles outside of Homer, Alaska. Living without plumbing or modern heating, the clan must subsist by hunting and preparing for the long winters.

Homestead Kitchen: Stories and Recipes From Our Hearth to Yours is an unexpected delight, and the subtitle reveals the true premise of this book. The book contains anecdotes, photographs, recipes, and helpful how-to tips. Anecdotes about the life of the present-day Kilchers are intertwined with their family history, which has connected them to the Homer area since the 1940s. Grandfather Yule emigrated from Switzerland to America with dreams of freedom and adventure. He eventually arrived in Homer, Alaska, and began making homesteading for his family a reality. Three generations later, the Kilchers are still continuing that legacy.

The photographs in the book, simple and beautiful, mirror the homesteading lifestyle. Views of Kachemak Bay and the surrounding countryside are breathtaking, and photos of the prepared dishes and the fruits and vegetables are both modest and appealing. There is one photograph of Venison Ribs with a hand-forged knife and a sprig of rosemary that resembles a Vermeer painting.

The recipes come from the pages of old family cooking journals and adaptations that Eve and Eivin have developed using seasonal ingredients available to them. They admit that some of the ingredients may not be readily available everywhere, but with a bit of ingenuity, they can be substituted with your own local fare.

The recipes for the Salmon Burgers and the Gruyere Crab Melts will have you dusting off the skillet in no time. The Kilchers include observations on smoking fish, fishing in Kachemak Bay, keeping bees, grafting fruit trees, and the physical and emotional aspects of hunting and harvesting meat.

This is not just a recipe book. It’s an homage to Alaska, to family, to homesteading, and to living respectfully off the land.

Stories and Recipes From Our Hearth to Yours 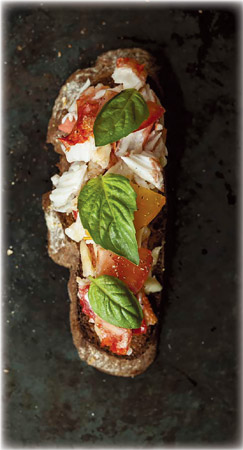 Preheat the broiler. Arrange the bread slices on a baking sheet in a single layer and brush both sides lightly with the oil. Broil for 1 to 2 minutes on each side, or until lightly golden and toasted. (It is easy to get distracted and char, instead of toast, your bread, so keep an eye on it.) Remove the bread and switch the oven function to bake, at 350 degrees.

Whisk together the mayonnaise and lemon zest in a small bowl. In a separate medium bowl, combine the crabmeat, onion, and salt. Add 6 tablespoons of the mayonnaise mixture to the crab and stir well to combine, breaking up any larger pieces of crabmeat with a fork. Spread the toasts with the remaining mayonnaise mixture. Divide the crab mixture evenly among the toasts and sprinkle each with 1 tablespoon of the cheese.

Bake for 3 to 4 minutes, or until the cheese begins to melt. Remove from the oven and top each toast with fresh tomato slices, sea salt, freshly cracked pepper, and a whole basil leaf.

Jayne Guitart has made many homes, including one in Alaska, but has never homesteaded. Having visited Homer, she can understand why generations would stay, work the land and be inspired by the beauty around them.