The Power of the Chowder 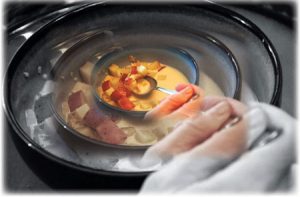 “Food is a powerful thing. It does more than satisfy your hunger. It can change your mood just by its smell or shape and with certainty, create an everlasting memory. Good food has a remarkable way of helping us understand the world just a little bit better simply by knowing where it comes from.”

A shellfish license is everything but ordinary. It’s a gift from generations past whose humble beginnings bound them to a life living primarily off the land and sea. Necessity being the mother of invention, culture and passion bred culinary feats of genius using a blend of simple, virginal ingredients. Today, those lucky enough to secure a license, gain access to some of the South Coast’s freshest food from the ocean, namely clams, conk, and quahogs. The bounty and resultant fare commemorate tradition, community, health, and happiness.

For my husband, 3rd generation Portuguese, a shellfish license is a necessity as he is the lucky owner of a quahog chowder recipe passed down from his father that originated in the sweet smelling, rustic

kitchen of his nana. Her recipe is legendary not only within the family but by the many friends and neighbors who benefit from the large crocks of chowder created by her kin. You’d be unlikely at any point in time to get the exact measurements for this recipe, as it’s more art than science. It’s a strategy that employs using your hands and eyes to determine the amount of an ingredient needed. In my husband’s words, “The key is to use overall feel, touch, and smell as your guide. You can’t fail.” In the end, the pure ingredients have yet to be written down and instead are practiced and applied in the kitchen as was done by Nana’s father in Portugal. They sat clearly yet surreptitiously in the memory of her family. Until now.

The motivation for sharing this recipe stems from our struggle as parents to support our young daughter who suffers from food allergies. This had us aggressively searching for options; something better than packaged foods labeled non-GMO, wheat free, soy free cardboard with faux cheese flavoring. Frustration, emotional stress, and exhaustion sent us back to pure basics— fresh ingredients from land and sea that our bodies were designed to digest. First on the list, Nana’s quahog chowder.

As a busy parent of two, my husband had not made quahog chowder in quite a while. However, time and circumstance being what they were, it all seemed like a bit of kismet. At 12 and 10, my son and 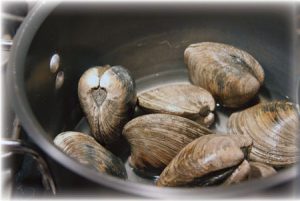 daughter had reached the right age, aptitude, and mindset to understand not only how, but why the chowder was made. At last, the shellfish license that my husband diligently secured each year would once again be used for what in his mind was its sole purpose: quahogs. Its infrequent use over the past few years was a cone of shame that would now be rightfully rectified. So as was done with his father, our kids joined my husband on treks to the semi-secluded beach whose waters held quahogs two fistfuls in size.

With a rake in one hand and a bucket in the other, they waded shoeless into the water until they were submerged chest high. Here, toes became their guide as they rummaged around for the indisputable feeling of a shell that was rough to the touch. Near an hour passes before they emerge from the salty 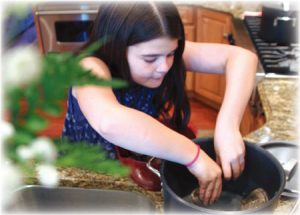 ocean a bit tired, but satisfied. The water may have been closer to cold than warm, and the ocean floor more rocky than sandy, though the basket full of fresh seafood proved its worth. On the way back home, a trip to the local farmers market provided the remaining fresh chowder ingredients, including onions that smelled pure and sweet, potatoes odd in shape and crusted with fresh earth, and fresh baked bread ready for the eating.

Back in the kitchen, the ingredients were sprawled out on the counter creating a magnificent puzzle of sizes and shapes. My son and daughter stared wide-eyed at the pieces before them, wondering no doubt how they’d pull them together into something edible. No time like the present. As instructed, each took a knife in hand and listened intently as my husband demonstrated the use and purpose of a strong steady grip in cooking. Focused yet tentative, my son used a chef ’s knife to prepare the potatoes and onions, which were purposefully cut into pieces edible in size: vegetables were forbidden to overwhelm the spoon for fear the sheer 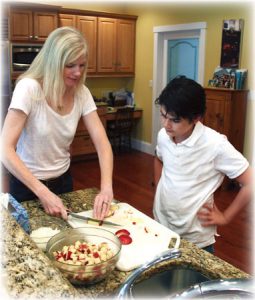 experience of eating the chowder would be anything less than perfect—Nana’s rule. My daughter, on the other hand, dove headlong into the fray using a broad bladed knife to pound and dice the sizable garlic clove placed before her. All the while, my husband recited a motto passed down to him at a similar age about the essence of food. “Food is a powerful thing. It does more than satisfy your hunger. It can change your mood just by its smell or shape and with certainty, create an everlasting memory. Good food has a remarkable way of helping us understand the world just a little bit better simply by knowing where it comes from.”

With the vegetables and spices ready to go, full attention turned to the substance of the chowder. The kids rolled up their sleeves and thoroughly washed the oversized quahogs before placing them into a large pot of cold water. Little time passes before they are cooked; about 5 minutes after the water boils or when the shells have opened wide. It’s an all hands on deck approach to loosen the cooked quahogs. Using a pair of tongs in one hand to hold the hot shell and a fork in the other, they are plucked free and 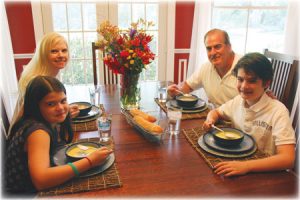 transferred into a food processor. Here they are broken down into meaty morsels necessary for a hearty chowder. They’ve now arrived at a most critical step—reserve the boiled water! The flavorful liquid resulting from the freshly cooked quahogs is a potent Portuguese elixir that enhances the flavor of the chowder. At least that’s what the elders say! My son dons oven mitts to hold the hot pot handles and pours the water through a cheesecloth-lined colander to remove the bits and impurities not suitable for consumption. The reserved broth is set aside.

On the burner to the right, the minced onions and garlic are added to a sauté pan fully coated with olive oil. This produces an intoxicating smell like no other. If they bottled and sold it as air freshener, I’d buy it in bulk. My daughter carefully folds the mixture together until the heat has allowed the ingredients to perfectly meld. In a large pot went the potatoes-garlic-onion mixture, quahogs, and reserved broth, which are brought to a boil till the potatoes are soft yet firm.

The concoction is removed from the heat and the heavy cream added in. My son has no true measurement to go by so he studies my husband’s face intently for the perfect measure. This order of events prevents the cream from curdling. Both kids watch in wonder as the base of the chowder turns to a heavenly white and the rich oil floats to the top to create a signature swirl. This is interrupted only by the perfectly cooked morsels bobbing to the surface just begging you to dig in. Of important note is the thinner broth—while traditional for this recipe, it is possibly unlike those you might find on a menu at a local restaurant. Should you wish to thicken it while staying gluten free, add a cornstarch or rice flour roux. Just don’t call it Nana L’s chowder!

Behind the scenes, I’ve set the table complete with a basket of fresh bread from the local market and softened butter. The kids no sooner take a seat then my husband delivers to them a steaming bowl of quahog chowder. They waste no time and plunge their spoons into the chowder, taking a moment to pull all ingredients to the top and into their mouths. The perfect bite. I wait a few seconds but see no immediate reaction. My daughter speaks first. “I’ve always thought that food tasted better when made by someone else. I was wrong, so wrong.”

And so the tradition lives on in each who dare to put this recipe to the test. Perfection is not required. You just have to be brave.

Tanya Lawrence is a writer and modern day adventurer living in Rochester. She loves spontaneous excursions with family and friends, especially those that lead to fresh food and bold wines. She can often be found with pen and paper in hand, inspired to write by the people, places, and things that surround her. 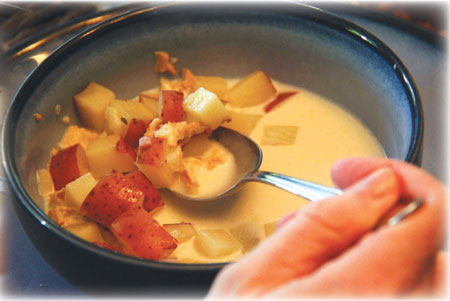