One Loaf of Soda Bread 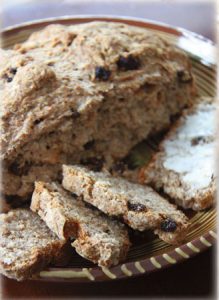 Readers of this magazine who reside in the suburban sector jocularly known as the ‘Irish Riviera’ will find this hard to believe: I grew up here on the ‘South Shore & South Coast’ without knowing a single person who advertised Irish ancestry. That’s right. After a thorough rummaging of the (admittedly meandering and poorly-insulated) halls of my memory, I am forced to conclude that the familiar tropes of Irish-American culture were entirely absent from my Rehoboth upbringing (as long as you don’t count Lucky Charms commercials, which even as a child I understood were as representative of an actual culture as Cap’n Crunch was of piracy and Count Chocula was of the undead). While I was well acquainted with people whose surnames I now know to be Irish (Foley, Fleming, Roarke, O’Connell) I don’t remember hanging around with kids who selfidentified as Irish-American until I was in college, where it seemed half my friends’ parents had emigrated from Ireland; the other half were Jewish, from NYC.

Based on a scientific survey of those aforementioned drafty memory vaults of mine, I’d say the ethnic core of my hometown, back in the seventies, was a composition of Portuguese, Yankees, and Italians (a distant third), orbited by a smattering of us outlying ‘others’. So my youthful exposure to Saint Patrick’s Day, including its de rigueur culinary components, was limited. Some years Mom actually tried making the standard-issue boiled dinner, but the metallic-tasting unfamiliarly-colored corned beef and the way-beyond-al-dente vegetables were so unlike her usual Julia Child-inflected cuisine that the meal may as well have been delivered to our table via space probe. Mom’s efforts were all the more valiant considering her upbringing. Her father was not shy about exhibiting the reflexive hatred borne by his immigrant forbears for the “maudite Irlandais.”*

Questioned about this today, my parents, who were at the time generally slippery about translating our Grandpapa’s outbursts, rationalize that linguistically challenged immigrants from many lands resented the seemingly easy entry into American employment that had, to all appearances, been granted to the English-speaking Irish. But my grandfather was born in Rhode Island, into a respectable, professional-class Franco-American family who all spoke perfect, educated English, so I’m unclear as to the direct source of his beef. A reliable crank, he may have just been gratuitously delighted to perpetuate the views of French-Canadian laborers of earlier generations. (I remember that he was a bit taken aback by the ethnic mix of my college friends, but surprised me in turn by trying to engage some of them on topics like the writings of Spinoza and the culture of ancient Phoenicians. An interesting, infuriating, guy.) 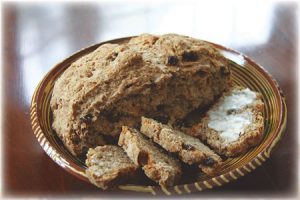 All this is to say that Saint Patrick’s Day was not a red-letter day in the calendar of my youth. As a result of this childhood vacuum, this non-exposure, I had no memorable personal experience of the material known as Irish Soda Bread until I was around twenty. And I realize now what a stroke of luck it was to start right at the top, with the stellar recipe massaged into being by the Irish mother of my college friend Siobhan O’Duffy. In her effort to recreate the flavor and texture of the Brown Bread of home for her family here in America, Mrs. O’Duffy had been compelled to winnow methodically and critically through packaged ingredients available in Minnesota grocery stores in the 1960s. Where most bakers ‘improved’ and Americanized Irish bread into a sweet, stark-white, puffy tea cake of a thing, Mrs. O’Duffy looked deep into its heart and saw the stone-ground whole grains as the crucial ingredients. Her brilliant, adaptive, solution: coarse-textured Ralston hot cereal and thick-rolled oats. The resulting bread was toothsome and gristy, with an honest level of tasty sweetness. I was lucky enough to scribble down her recipe. Now Ralston Cereal has disappeared from supermarket shelves, and Siobhan’s mom has passed on, I hear, but I’m left with the taste-memory of that truly wonderful bread. In the spirit of Mrs. O’Duffy, I offer you a darn good version of the recipe using the ordinary whole-wheat flour found in baking aisles today. But you can, if so motivated, adapt this recipe to be even better. In fact, the general uplift in the quality of ingredients available to American cooks makes it possible to get closer to Mrs. O’Duffy’s childhood bread. Many grocery stores now carry an array of far more esoteric products than those I suggest. And for those of you who enjoy foraging as you travel, or scouring the internet, the real score would be getting flour freshly milled from locally-grown grain: something completely possible in Maine, New Hampshire, Vermont, Quebec, and even parts of Massachusetts—a bit of a challenge, but well worth the trouble for a proper celebration. 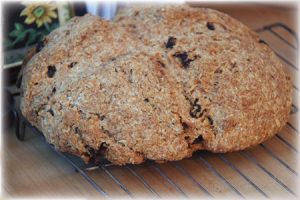 Paula Marcoux is a Plymouth food historian and the author of Cooking with Fire (Storey, 2014). She likes her corned beef grey and point-cut.