From Fringe to Forefront : Cranberry Red 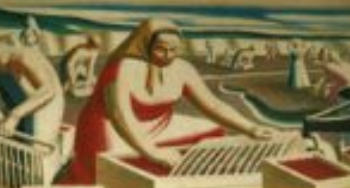 Were I to handpick a metaphorical fruit for New England, it would be the cranberry. Sure, it’s endemic to our region, but what makes the cranberry such a useful metaphor is not its place of origin, but its character. The cranberry is a crimson understatement. Low and inconspicuous, its vines creep along the sand and muck where other crops languish, thrilling our thrifty sensibilities by extracting value from wasteland. These are not the lush and decadent fruits of the tropics—overindulged, oversweet, and overripe—but flinty morsels, biting and nutritious, unobtrusive in a most assertive way. In the history of how the fruit has been gathered, grown, and eaten, it is our mirror.

New England’s fascination with the cranberry took root early, at a time when the fruit was harvested wild from public lands, consumed avidly, and exported internationally. As a resource held in common by the entire community, the vines played a special role in sustaining the poor, who needed only able hands, a container, and desire to secure nutrition or stock for trade as the pall of winter loomed. Yet once cultivated, the vine’s place in New England culture changed radically. By the 1840s, a stream of rock-ribbed Yankees set about privatizing the berry, systematically transforming wastelands by transporting vines from public lands to personal yards, reaping fortunes from red gold. New England’s great innovation would not be in taming wild vines, but commercializing them.

This berry-based commercial revolution cast a red-hued shadow. Like many crops, cranberries require comparatively little labor until the brief, intense demands of harvest. While the cranberry industry was young, kin and community sufficed, but as profits soared and the number and size of bogs did too, growers were forced to explore other labor arrangements. By the 1870s, the rootless poor, often immigrants, became the deep end of a low-wage labor pool, and the table-flat bogs became a shop floor for diverse gangs of Polynesians and Russians, Italians, French Canadians, Finns, and Cape Verdeans. For these workers, the circadian rhythm of poverty meant a bleak and roaming life, cycling from mills to ports to fields as jobs opened and closed to the yearly clock. Decked out in wide-brimmed hats and colorful rags to stave off the soil, sun, and wire-like vines, pickers fell to their knees and progressed in tight formation, laboring down narrow, dry rows marked out by parallel white ropes. Exotic in their poverty, they made for a ready touristic show by the turn of the century.

Life for bog workers was as carefully regulated as those well-demarcated rows. At many bogs, workers were hauled out and housed in ramshackle shanties on site. When you lived in the factory itself, there could be no waste of time in transport, no missing shifts, no showing up late. Labor was cheap and with little incentive to invest in housing for the brief harvest season, many growers offered little more than four walls and an optional floor and no semblance of comfort. Until labor reformers intervened after 1910, long days on the bog engrossed entire families, including children barely old enough for school, growers noting the excellence of tiny fingers for plucking small fruit from thick vines. In the evening, when the light was too low to work and the alcohol flowed, the shanties became notorious for violence and licentiousness.

Workers were hardly helpless. Learning from the mills, perhaps, they introduced labor activism into the red-berried culture. Though ignored by mainstream unions, they organized themselves, often along ethnic lines. On Cape Cod, pickers launched lighting strikes as early as 1892 to demand fair pay, while Italian workers struck bogs in New Jersey, and Oneida Indians struck the marshes of Wisconsin. Off and on for decades, agitation flared, yet whether commodity prices rose or fell—whether workers complained or acquiesced—wages seldom budged. By the time of the Great Depression in 1929, when half of Cape Verdean workers were thrown out of work, desperation took root, blooming into desperate response.

In 1931, nearly 150 workers walked out on Ocean Spray’s Bog No. 1, though their solidarity soon sundered when Marcus L. Urann, the company’s redoubtable president, convinced them that he had few options but to stay pat on wages. Economically, dire became direr, and two years further into the Depression such arguments were sapped of persuasive force. As the harvest of 1933 approached, two white activists, Fred Wood and Daniel J. McIntosh, convinced nearly 1,800 pickers, mostly Cape Verdeans, to unite in the new Cape Cod Cranberry Pickers Union in southern Massachusetts. Applying for affiliation with the AFL, the organizers issued a bold demand for a wage hike to pre-Depression levels, and when the Cape Cod Cranberry Growers Association steadfastly refused to negotiate, three hundred workers walked off. The response was electric. Nearly 1,200 workers followed a day later and the strike flared out across the bogs. A complete shutdown of the harvest seemed imminent.

The growers did not blink. Insisting that forty cents an hour was sufficient, they went on the attack, calling in the press, town officials, and police to thwart the “outsiders” and “agitators” inflaming their bogs. As the Pickers Union staged guerrilla strikes and led caravans of picketers around the bogs to harangue reluctant pickers into joining them, the growers pulled out the stops. With no time to lose in the short harvest season, they hired replacement workers “mostly from the town’s public welfare lists,” setting poor against poorest, and they called out police and dozens of “special officers” to target strike leaders. Although McIntosh carefully instructed the union “against any violence in their picketing,” the press spread rumors of brandished guns, vandalized bogs, and assaults on scabs, and they even howled that strikers were communicating in Portuguese to confuse the police. Portuguese, what Cape Verdeans speak.

In no time, the rumors and mass arrests sapped the strike of public support and momentum, and its death knell rang during only the third week: Wood and McIntosh were sentenced to sixty days in jail for “fraudulently” obtaining signatures on union application cards; fraudulent because the AFLhad not yet authorized the union. With the leaders salted away and the onset of rainy weather, the harvest and strike whimpered to a close.

Despite their failure, the pickers’ union resumed efforts in 1934, adding collective bargaining to their list of demands, as guaranteed under the National Industrial Recovery Act. The stone wall of growers and officials held firm. Even as police in Carver armed themselves with riot guns and gas bombs, the strike commenced, but just as in the previous year, its leadership was quickly picked clean. Six days in, Wood and McIntosh were arrested for “intimidation” after chartering a small plane and buzzing the bogs, and preemptive raids took care of the rest. In a post-mortem, the US Department of Labor was clear about what happened: “The union was organized by outsiders,” they concluded, “and was composed predominantly of workers belonging to a racial minority. It almost inevitably faced intense hostility from communities in which the most prominent citizens, many of them holding public office, were themselves grower-employers.”

Ultimately, neither surrender by strikers nor fair wages from growers resolved matters. Instead, the end of the simmering strife can be traced to 1912, when Urann introduced the radical notion of cooking cranberries and canning them as sauce, recognizing that doing so enabled him to transform fresh berries with a limited shelf-life into a product that could be sold throughout the year. What did not become apparent for another 25 years was the impact this marketing innovation would have on labor. In 1912, nearly the entire New England crop was harvested dry, gathered by hand on dry bogs, whereas today, nearly 90% is harvested wet: bogs are flooded and the water is agitated, releasing buoyant berries from their vines so that they float to the surface for easy gathering. Although wet harvesting is cheaper, requiring far fewer workers, Massachusetts growers resisted the process for years because it renders the fruit unsuitable for fresh sale. But once the implications of canning set in, all that changed; cooked and inside a can, no one knows the fruit is damaged. From the 1940s onward, Massachusetts growers turned increasingly to wet harvesting and the rise in popularity of cranberry juice only increased the trend. Labor disputes were settled by relegating pickers to the past tense so that tourists now flock to see the colorful wet harvest, not the color of poverty.

If the cranberry is a metaphor, it is a metaphor with regional bite. Anchoring the Thanksgiving table, the simmering crimson sauce reminds us that it has never really been a side dish.

Rob Cox has worked on the fringes of history since receiving his doctorate at Michigan. Currently head of Special Collections at UMass Amherst, he is author of five books on topics ranging from American Spiritualism to New England culinary history.

Read the Recipe inspired by the story: Jagacida