Gone are the days when bacon only appeared alongside two eggs over easy. Whether you wrap, fry, or dust something with it, bacon has become a staple in nearly every foodie’s diet—cholesterol be damned!

The slabby cut of salty pork has chefs around the country flexing their culinary muscles to show how they can put it to good use in any setting. Plymouth chefs, Stephen Coe of Mirbeau Inn & Spa at the Pine Hills, and Mike Morway of Nosh Tavern, proved to be among the best when they teamed up and beat out 22 other chefs at the fourth annual World Food Championship. Winning the competition, held in Kissimmee, Florida, earned them the title ‘World Bacon Champions’ and a $15,000 prize! When asked about the team’s strategy, Coe credits a mix of innovation, classic technique, and rustic comfort. 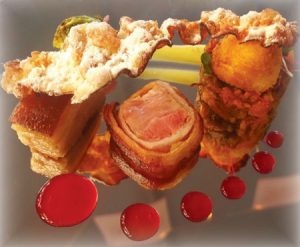 “If there’s something different—or just plain over the top—I like to be the first one trying it,” said Coe, who specializes in classic French cuisine at Mirbeau’s restaurant, Henri-Marie. “Teaming up with Mike meant merging two styles of cooking,” explained Coe. Morway’s talent lies in the elevation of tavern-style food; he has been on the South Shore food scene for over 20 years. The competition was a marathon lasting well over a week, with the chefs accruing points along the way. “We cooked every other day or so and had different themes or mystery ingredients thrown at us the day before,” said Morway. “In the grand championship, we made what we called ‘Smoke & Mirrors’—bacon-wrapped confit bacon, bacon sweet potato hash, confit pork belly, bacon chip, bacon dust, cranberry gastrique, dehydrated Brussels leaves and bacon hollandaise. LOTTA bacon!” The dish was served on small mirrors atop glass blocks filled with dry ice, creating a lingering smoke effect, and was the pièce de résistance in winning the national championship.

For Coe, this isn’t the first time he has been recognized on a national stage. In 2014, he finished among the top three chefs at the World Championships and has garnered praise over the past decade from notable food experts at the American Culinary Foundation and the Food Network. Prior to Mirbeau, he worked at Alba in Quincy, and Tosca in Hingham.

Morway has his own impressive resumé spanning more than two decades. Prior to launching Nosh Food Group, a downtown Plymouth tavern which includes a successful catering business, Morway spent six years with the Boylston Restaurant Group, the parent company of T-Bones Texas Roadhouse. “I find homemade, locally sourced ingredients are always the biggest key to success,” said Morway, “in day-to-day business, as well as in cooking competitions.”

The victory in Kissimmee is more than just the money and title for our local chefs. “Winning gives us an opportunity to help shape a food culture on the South Shore,” noted Coe.

You can see Chefs Coe and Morway in action—the World Food Championships will air on A&E’s FYI Network this summer!

Tatum McIsaac lives in Kingston with her husband and two children—who all LOVE bacon!