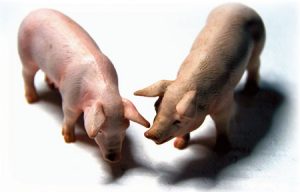 What event has invested the most in working with and promoting responsibly raised heritage breed pigs? Cochon555! Launched in 2008, the event was created as a platform for farmers to educate chefs, for restaurants to source exceptional ingredients, and to showcase responsibly raised proteins to consumers. It is a nationwide culinary tour, competition, and event that collaborates with farmers, chefs, and consumers to broaden knowledge of heritage breed pigs.

In January 2016, the South Shore became home to pork royalty when a pig from Brown Boar Farm (BBF) won Cochon555’s kick-off event in New York City. Marshfield farmer, Peter Burrows, and his family who operate BBF, partnered with Chef Angie Mar of the famed West Village Beatrice Inn in New York City for the competition. “It was just so extremely exciting for us because Cochon555 is an organization that is completely aligned with what we do as farmers,” said BBF’s Meaghan Burrows Swetish, who enjoys working with an event that shares similar values, “and to have our pig win was the icing on the cake.” The Cochon555 US Tour produces pork-filled competitions between teams of chefs and farmers with a focus on ‘heritage breed pigs’ and all their parts. Each event pits 5 chefs, 5 pigs, and 5 wineries against each other to create six distinct dishes, judged by chefs and eventgoers. Snout-to-tail recipes abound, guests can taste succulent pork in all its forms and each event uses locally raised pigs, creating a mouth-watering environment for enthusiastic locavores.

Conceived by founder Brady Lowe as an “ultimate quest of flavor”, the national tour makes ten stops, including major cities like New York, San Francisco, Miami, and Los Angeles, with winning chefs traveling to Aspen in June to compete for the ‘King or Queen of Pork’ title in the Grand Cochon finale.

Cochon555 events cook up an innovative approach to spread the word about heritage breed pigs. The competition and tastings along the US tour offers guests a hands-on lesson about the farms and farmers—who work strenuously to raise their pigs conscientiously.

Cochon555 also works with culinary schools to advance awareness of heritage breed pigs, leading to droves of new chefs who expect the distinctive flavor of happily raised pork to star on their menus. This has also helped support and grow a national network of farmers who raise meat humanely.

Maybe the most innovative aspect of Cochon555 is using the whole pig, not merely select parts, to create culinary art. Brady Lowe says about the competition, “It’s about planning every inch of pig fat, skin, ear, and muscle before making the first incision.”

Ultimately, the event lets farmers, chefs, and foodies relish the flavors only a heritage breed pig can yield, truly in all its glory.

*Title taken from name of a dish created by Chef Angie Mar using a BBF heritage breed pig during the New York event.

Article author:
Sam Vandewater just returned to the South Shore after studying in Cape Town, South Africa for two years. He has been enjoying the local foods he missed while continuing to learn more about the new foods he discovered through his travels.