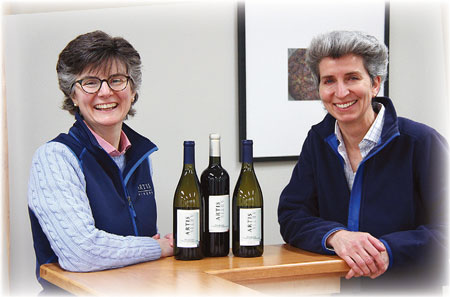 There is an exciting addition to the Massachusetts wine scene housed in a nondescript office park in Pembroke. Head winemaker Jacquelyn Groeper and co-owner Karen Schilke started Artis Winery in 2016 and have just released their first wines to the public, currently available at the winery and the Boston Public Market. It’s a labor of love that requires attention to detail, and it shows in the quality of the wines.

I first met Jacquelyn in the fall of 2012 when we were part of the inaugural Wine Making course given by Boston University and taught by Master of Wine Bill Nesto. Held at Boston Winery in Dorchester, it consisted of three students respectively making a different varietal and seeing it through from the crush to bottling. Jacquelyn made an elegant Pinot Noir and she decided to make two more vintages in subsequent years. It was then Jacquelyn and Karen began looking for space to start a winery of their own.

Jacquelyn is serious about the study of wine. Since her first class over five years ago, she completed Boston University’s Wine Studies program, achieved a Certified Specialist of Wine designation, and took classes at the University of California at Davis. Currently, Jacquelyn is enrolled in Washington State University’s Enology program, which she is due to complete this spring. Karen is not only the co-owner, but she is also learning winemaking skills by actively engaging in the process. Both she and Jacquelyn put in long hours this past fall, keeping up with the crush and fermentation of the 2017 vintage while getting the 2016 vintage ready for sale. Vacations from their regular jobs have been spent standing on concrete floors sorting grapes and, as Karen has attested, long hours of cleaning equipment.

I asked Jacquelyn how her education progression has informed her decisions about Artis’ first vintage. She mentioned specifically the 2016 Chardonnay. The grapes were sourced from the North Fork of Long Island, and the original plan was to age the wine in new American oak barrels. After pressing the grapes, however, she determined that the juice was too delicate to put in oak because it would overpower the fruit in the wine. Instead, Jacquelyn aged the wine for six months on the lees (dead yeast cells) in steel tanks. It gave the final wine a full, round mouthfeel and complexity. The wine has a yeasty nose, not unlike Champagne, and a rich depth that would not be there if not for her foresight gathered from experience and long years of study.

In addition to the Chardonnay, a red blend of Tempranillo and Garnacha also has been bottled. It has layers of flavor that progress as the wine opens up with big, red berry notes and a background of orange peel and chocolate. These wines reflect Jacquelyn’s philosophy of old-world practices of letting the grapes determine what path to take regarding the maturation and aging of the wine, rather than manipulating the wine to create a preconceived style.

Other wines soon to be released include a Rose of Pinot Noir sourced from California, a Pinot Gris with grapes from Greenvale Vineyards in Rhode Island, and three different styles of Cabernet Sauvignon sourced from the Suisun Valley of California.

Jacquelyn and Karen are now implementing a marketing and sales plan that includes a website, creating relationships with retail stores and restaurants to sell their wines, and putting the final touches on a tasting room at the winery.

Artis Winery is part of the Southeastern New England AVA, a legally recognized viticulture area that includes the best wineries in this part of the country. There has been and will continue to be an effort to source grapes as local to the winery as possible, including the southeast New England area, Long Island, and the Finger Lakes region of New York.

The challenge with Massachusetts and Rhode Island vineyards, in particular, is the regional weather. Humidity can cause many mold problems and, as was the case during the winter of 2015, many vines were damaged by “winter kill,” requiring the wineries to tear out those vines and replant. Overall, harsh winters of late have reduced the yields of grapes available for purchase, so Artis will look to other sources outside the region when necessary. 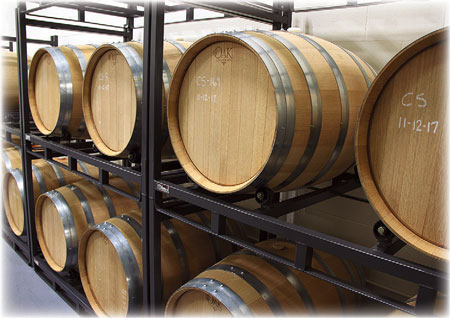 Looking ahead to the 2018 vintage, Jacquelyn is going to explore relationships with grape growers in Oregon and Washington as well as expand her work with Greenvale Vineyards. In all cases, she wants to have more control over the cultivation decisions of the grapes Artis will use. And, for that effort, we will be rewarded with exceptional wines.

Chris Chisholm is a Certified Specialist of Wine, a graduate of Cook Street School of Culinary Arts in Denver. Chris completed the Boston University Wine Studies and Wine Making programs. He currently teaches at Mix It Up Kitchen and is a sales consultant at Snug Harbor Wine, both in Duxbury.