text and photos by Alexandra Hallowell.

For as long as I can remember, my uncle Stephen has been a tinkerer. When I was little, he had a huge blueberry patch in the back yard of his Duxbury house. Unfortunately, the bushes got sick, and he cleared them out when I was about 10. He also dabbled with beekeeping and had a short stint as a recreational lobsterman. One summer on his boat No Knees he even caught a fabled blue lobster. Next up was fly-fishing. My sister, cousins, and I used to sit at the dining room table, tying flies on Sunday nights. We had no idea what we were doing, but that never really mattered.

A few years ago, Stephen became interested in growing giant pumpkins. He took a trip to Nova Scotia, where he wound up visiting the Howard Dills Giant Pumpkin Farm. Howard Dills was the first to start growing giants; fully grown, his pumpkins weighed between 400 and 600 pounds. Since the popularity of pumpkin growing has taken off, the record has repeatedly been upped, with the current champ weighing in at over a ton. Never one to shirk from a challenge, especially a self-imposed one, Stephen started tinkering with giant pumpkins. He dove into online forums, where growers from around the country trade seeds and “secret” tips. He started cross-pollinating seeds to make his own ideal breed adapted to his growing conditions. When I first talked to him about writing this article, he was a little uncomfortable: he insisted that I be sure to say he is no expert. He tries all sorts of different techniques; some work and some don’t. So far, Stephen’s giant pumpkins have weighed in at over 1,000 pounds. Let me tell you, that’s just as big as it sounds!

Growing giant pumpkins is a year-round project. Over the winter Stephen hunts on the Internet for different breeds and seeds to complement his own. Mice are a constant problem, so he experiments with different types of rodent repellent. The last thing a grower wants is for his pumpkin to be turned into a mouse nest! He mixes his own fertilizers too; he’s been on a seaweed kick lately, incorporating different local varieties into the soil. He packages and trades the seeds from his successful pumpkins with other growers, some as far away as Alaska. And, in early spring, he starts sprouting the seeds, prepping them for the season.

It is especially fun when it comes time to trot the plants out to summer fairs. Stephen uses a Bobcat with a crane attachment to hoist the pumpkin out of the field and into his truck. It’s quite the production.

Spring is when things really get underway. Once it’s warm enough—April 15 or so—Stephen brings the plants out to the field and sets them up for the summer. The pumpkin’s vine network can become complex; over time, each plant takes up about 600 square feet. It’s quite a sight. Because this is New England, and because spring can be fickle, Stephen sets up electric warming cables to keep the plants safe from frost. The vines grow out in a Christmas tree pattern, and he trims the tertiary vines to keep the plants’ energy concentrated. He is currently using a combination of kelp, humic acid, fish-based fertilizer, Mykos (a product that facilitates beneficial symbiotic nutrient exchange in the soil), and various fungicides to keep the plants happy.

In the summer, to prevent rot, Stephen places the pumpkins on pallets. This way, mold and fungus can’t form as easily underneath. Once the plants really start growing, he covers the pumpkins with old t-shirts (the summer sun hardens the skin and can limit growth or cause them to split).

Mid-to-late summer is a stressful time. Stephen tends to the pumpkins, sometimes several hours a day, but still, he never knows what may happen. Sometimes—despite careful attention—rot forms and the pumpkins unceremoniously deflate into a heap of semi-rotted mush overnight. Two years ago, he and many others had to battle back some terrible white fungus that hit pumpkin crops.

When such setbacks occur, Stephen consults the Internet. His pumpkin growing forums sound more like a group therapy session than a farmer’s resource! The participants console one another when they suffer an unexpected loss. And, like proud parents, they share their babies’ successes as well—photographs and all.

This year, Stephen is really excited to be growing some new seeds. He got one from the new record holder, the 2032 Matheson (the number refers to its weight!). He has crossed it with one of his own plants, which sounds like it was quite the process—he had to hand-pollinate the blossom, which opens at 6:00 am. Stephen keeps the blossoms covered with a nylon stocking to prevent accidental pollination by bumble bees. 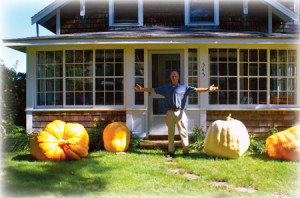 Stephen shows off a few of his prize specimens outside his home in Marshfield.

I think the thing that interests me most is the camaraderie Stephen has developed with growers from across the country. It is this sense of community that keeps him interested. He is constantly complaining about the vast amount of time and energy the plants consume, but it’s clearly a labor of love. Some nights he’ll be out in the patch until dark, tending to his pumpkins and sometimes just admiring his plants.

Stephen and his wife Moira don’t live on a big farm. He grows his pumpkins to the side of his house, in a clearing that gets sufficient sunlight. As the pumpkins grow bigger, he enjoys the view off the side porch, where he keeps an eye on them as he grills. It is especially fun when it comes time to trot the plants out to summer fairs. Stephen uses a Bobcat with a crane attachment to hoist the pumpkin out of the field and into his truck. It’s quite the production. When he’s got something he’s especially proud of, he heads to the Topsfield Fair or to the Marshfield Fair, where he’s won several prizes in recent years.

I was really fortunate to grow up on the same street as my aunt, uncle, and cousins. I always loved going over to their house. Our family has always been an active one, and that hasn’t changed as I’ve become an adult. Now that I live in California, I’m frequently hit with homesickness, but seeing the pictures from Stephen and my dad puttering in the pumpkin patch helps to keep me feeling connected.

For those interested in trying to grow their own giants, Stephen recommends BigPumpkins.com. He uses the grower’s diary to share his process with others in the community. The Topsfield and Marshfield Fairs are also great places to see these giants in person.

Alexandra Hallowell is a Duxbury native and a graduate student at UC Berkeley. She lives in Oakland, CA, and while she loves the concept of gardening, she did not inherit her uncle’s green thumb.