Locavore Abroad • From Bean to Cup 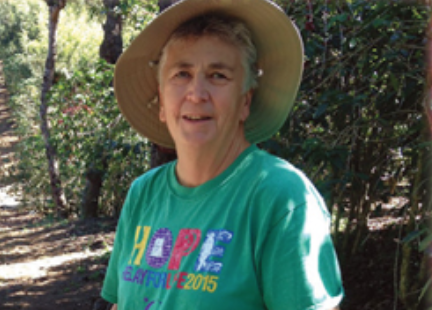 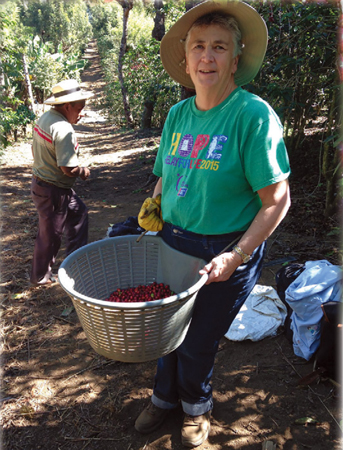 It was coffee harvest time in Guatemala. On the mountainside above Antigua, in a small town called San Miguel Escobar, my partner and I, along with our niece, volunteered on a coffee farm on a week’s service trip in January. Our trip was organized through International Volunteer HQ and Maximo Nivel, their local group in Antigua.

Maximo Nivel provides volunteers to a nonprofit called De La Gente, which means “from the people.” De La Gente partners with five coffee co-ops throughout Guatemala and has established a network of direct sales markets across the globe for the sale of this coffee. It also pairs its farmers with groups like ours (on service trips) to help bring in the harvest.

All De La Gente’s coffee profits go directly to the farmers, allowing them to invest in the education, healthcare, and nutrition needed for healthy families and thriving communities. We arrived in Guatemala on Saturday evening and got settled with our home-stay family. On Sunday, we were given a brief tour of Antigua and an introduction to the Maximo Nivel staff and services. In addition to the three of us, there was a young man from Manchester, England (Bruce) who managed a specialty coffee shop, and a woman from New Jersey (Liz), also a volunteer. We received instructions for catching the bus Monday morning at 7:30 and that a staff member would accompany us.

Upon our first bus stop Monday morning, we walked about a half-mile to the De La Gente office where we were going to meet the farmer we would be helping. At this point, I should mention that my partner Shari and I know some Spanish (she more than I) but the other three…none. The staff members at De La Gente hail from various countries, but all are fluent in Spanish and English. We were all introduced to Lesbia and her two children and off we went to her home in San Miguel Escobar where our work would begin. For the next two and a half hours, we sorted green coffee beans by hand. First, we pulled out quality beans without blemishes or insect damage. This premium coffee would be sold through De La Gente, while the “seconds” would be sold to commercial coffee buyers. Some conversation went back and forth, primarily between Shari and Lesbia, but I was able to grab the gist of most of it. Mid-morning we had a coffee break and were served delicious coffee.

On Tuesday we were back at the De La Gente office and again met by Lesbia for a repeat of sorting beans. Mid-morning Lesbia took us up to the roof of the house to see the green coffee beans that were laid out drying in the sun. Depending on the weather this can take up to 14 days. By day two we were faster and worked through quite a large number of beans. Although I don’t know how many kilos of beans we sorted, eventually the green beans are standardized for shipment into burlap bags weighing 69 kilos (approximately 152 pounds), then shipped all over the world in containers weighing 250 to 280 kilos (approximately 551 to 617 pounds.) 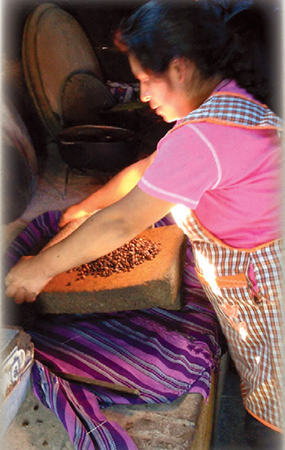 After our sorting was completed, Lesbia asked if we would like some coffee. Expecting a repeat of our experience from the day before, we said yes. What followed was not only a “bean to cup experience” but most definitely a highlight of my trip.

Lesbia took some of the green beans and brought us to her kitchen, a stone room separate from where we were working. She gathered wood and started the fire in the stove and placed a comal, (a large steel circular plate), over the burner. Next, she poured the beans onto the comal and proceeded to roast the beans, pushing them around with a wooden spatula. When they began to smoke (as they always do when roasting), we assisted by fanning the smoke with a fan made of straw. When Lesbia determined the beans were roasted just right she took them off and briefly cooled them in a pan. Next, she set about grinding them. Lesbia’s husband had joined us, and he assisted in the next process by laying out a clean cloth and bringing in a piedra de moler. This is a very heavy, two-piece grinding stone approximately 18 inches long and about 12 inches wide. The second piece resembles a tapered rolling pin (also made of stone); together they are used to grind grains and coffee where there is no electricity. We all had an opportunity to use the piedra de moler to grind the coffee beans. It takes a good deal of strength to make a fine grind. When Lesbia determined that the beans were evenly ground, (truly she did most of the work), she removed the heated water from another burner and finished making our coffee. We returned to where we had been sorting the beans, and were served the freshest cup of coffee I will ever taste!

Our coffee adventure was not over though. Wednesday morning found us back at the De La Gente office. This day we were met by a new farmer, Daniel, an older gentleman (probably about my age!), who was there to take us up the mountain to his coffee farm to pick beans. He mentioned that it was about 20 minutes away. Clearly, something got lost in the translation. Nearly an HOUR later we arrived up the mountain! We started out walking through the small town of San Miguel Escobar and then took a right turn up the dirt road . . . up and up we went on a path I thought would never end. Probably because of a lack of oxygen, it didn’t dawn on me that coffee is a high-altitude crop growing at 4,000-6,000 feet! Daniel, the perfect gentleman, kept pace with me at the tail end of our little group. Once we finally arrived at his coffee trees, and the terrain leveled off, we were outfitted with baskets that attached to our waists. Daniel gave us instructions, (more visual than verbal), of what to pick, and we were on our own. The next two and half hours were spent bending branches and picking coffee cherries, each of us lost in our own thoughts. Fortunately, we did not have to carry the beans down the hill…only ourselves, as the beans are brought down the mountain by horse or mule. On Thursday we repeated the process; Daniel’s wife also joined us to pick beans. Again, we got faster: 45 minutes up the mountain and we each picked more beans than the day before.

On Thursday, when we arrived back at Daniel’s home to drop off our empty baskets, he showed us the final steps in the coffee process. The cherries are poured into a machine that resembles a meat grinder and is power by a bicycle. This separates the green bean from the red pulp (cascara) on the outside. The beans are left to ferment for about 24-48 hours in the bags, then spread out on the metal roof to dry.

Friday is generally spent in the city of Antigua handing out marketing materials from the coffee co-op to the many coffee shops and restaurants. Because we were there during the first week of the new year, their materials had not been printed yet. We ended up with a day off to rest, recuperate, enjoy the city of Antigua, and to reflect on our remarkable experience. After participating even to a small extent in the lives of the farmers who produce our coffee, I am convinced that we still really do not pay enough for a cup of coffee. It is hot, hard, tedious work.

Denise Sheppard is a beekeeper, gardener, and foodie and firmly believes that life is too short to drink bad coffee! She has been drinking fair trade coffee since the mid-80s and has also ventured into coffee roasting. This trip to Guatemala was the ultimate coffee experience and confirmed her belief that given the work involved, we don’t pay nearly enough for a cup of coffee!